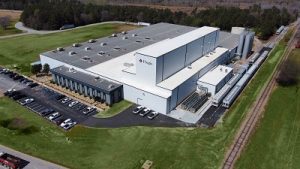 McCrory Construction has been honored with two separate project recognition awards – one national and one regional – for its single-source delivery of a state-of-the-art manufacturing facility in Anderson, S.C., for Pregis, an industry leader in the packaging space.

First, McCrory won the 2022 National Design-Build Award of Merit from the Design-Build Institute of America (DBIA) in the Industrial/Process category. McCrory is one of three contenders for DBIA’s National Award of Excellence in this category and is a finalist for DBIA’s Best Small Project award. The awards will be presented in November during DBIA’s annual Design-Build Conference in Las Vegas.

Pregis’ facility also won Best Project – Manufacturing in Engineering News-Record’s (ENR) 2022 Regional Awards competition. McCrory competed with entries from six states in the Southeast to win the top award in the Manufacturing category. McCrory’s industrial team will receive the Best Project Award during ENR Southeast’s awards luncheon in Atlanta in November. McCrory is a contender in ENR’s national awards competition, the results for which will be announced later this year.

The project required a combination of demolition, renovation and new construction to repurpose an existing site for Pregis’ use. McCrory’s team demolished 30,000 square feet of a 160,000-square-foot single-story facility, then added five stories of vertical construction in the same footprint along with two stories of office space. The resulting 102,000-square-foot production area is the most technologically advanced extrusion facility in North America.

“Speed to Market was the main driving factor for this project. The most important key to the accelerated schedule – less than 10 months from design to construction completion – was the urgency applied to the design and prepurchase of 780 tons of structural steel in December 2020,” said McCrory’s Stephen Cooper, Director of Greenville Operations.

McCrory Construction, headquartered in Columbia, S.C., with an additional office in Greenville, S.C., is a full-service general contractor that has operated continuously since 1918. At 104 years old, McCrory is South Carolina’s oldest general contractor. Licensed in 13 states throughout the Southeast, McCrory has served an array of private and public sector clients through more than 3,000 general construction, design-build and construction management projects. Now under fifth generation private ownership, McCrory continues to be a leading force in retail, commercial, industrial, healthcare, and multi-family construction in the Southeast. Known for its people-focused culture, McCrory was named one of the Best Places to Work in South Carolina for 2022. To learn more, visit mccroryconstruction.com.