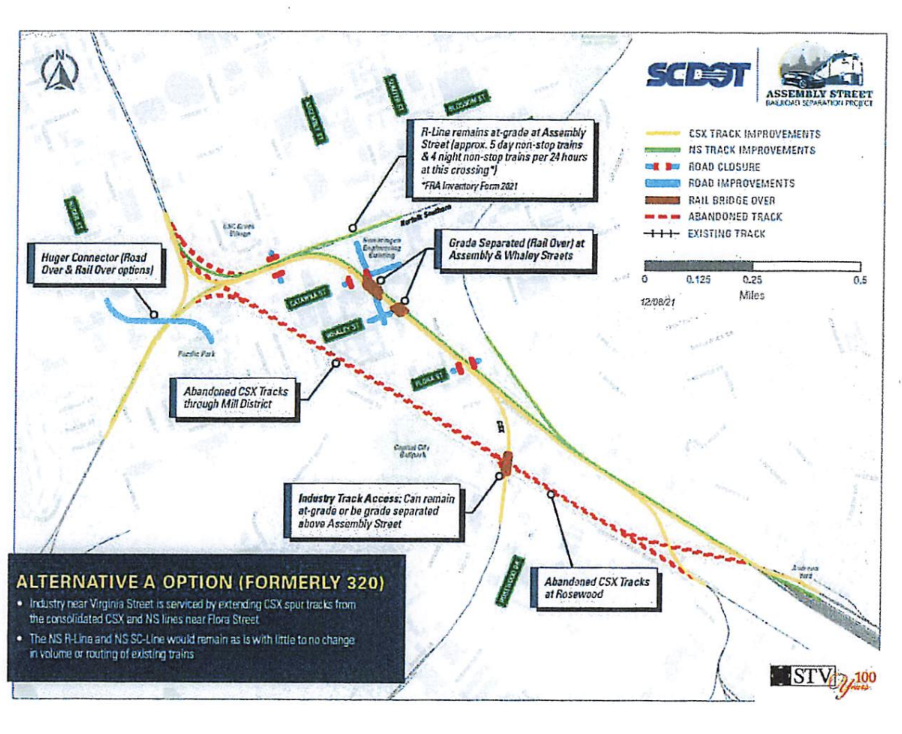 Everyone in attendance supported plans to work together regarding rail elimination and alignment. Columbia is a constant hub of activity with government, industry and education all coming together in the Capital City. Thousands of people work here, attend college here, and serve the people of this state in various capacities. With that comes thousands of commuters coming to the City daily, and thousands more on the weekends for conventions, entertainment and events. The press conference was held on Assembly Street, which is a heavily traveled artery and the combination of increased vehicular traffic congestion, freight rail volume and slow train traffic speeds results in unacceptable delays (both to vehicles and trains), increased air and noise pollution, and increased danger to pedestrians.

Local leaders are focused on the Assembly Street Railroad Separation Project and Huger Street Connector, which seek to address one of the state’s highest profile traffic areas where both vehicle and train traffic meet on a daily basis. Located adjacent to Williams Brice Stadium and minutes from the State House, this project will separate train and vehicular traffic permanently, allowing both to move freely through Columbia.

“The railroads have constricted the economic development of this community. This project is a solution to that problem, so we can grow without having people wait, sometimes an hour for the train to clear through. We can’t have a vibrant downtown, if people are always constricted by these trains,” said Senator Richard A. “Dick” Harpootlian  (District 20).

Although the preferred alternative has not been selected, the below description focuses on one of the leading alternatives.

Alternative A (Formerly 320): Eliminates 15 grade crossings (6 via horizontal; 9 via raised profile). Assembly Street would be lowered and the rail tracks would be elevated at Catawba and Whaley Streets. The existing at grade crossings at Dreyfuss and Assembly (near Capital City Stadium) and Rosewood and Assembly (near the Fairgrounds) would be removed. Road closures would occur for Lincoln and Flora Streets. The rail line crossing Assembly Street near the California Dreaming Restaurant (400 block of Assembly Street) will remain – the low volume of train traffic has minimal impact on vehicular congestion.

As part of the project, a proposed new vehicular road with bridge over the current rail line would be built connecting Huger Street with Wayne Street. The at grade crossing at Huger Street would remain for local traffic.

The City of Columbia and the South Carolina Department of Transportation (SCDOT) are collaborating to advance the project forward while securing funding for the next steps. Preliminary Engineering Agreements have been established with CSX and Norfolk Southern. The railroads have provided comments to alternatives and SCDOT are reviewing them internally. The EA (Environmental Assessment) and the FONSI (Finding of No Significant Impact) are expected to be complete by 4th quarter 2022. Because of the preliminary status of the project, a final project cost estimate has not yet been determined. However, the current estimated range as provided by the SCDOT is $180 – $220 million for the entire project.

The South Carolina Department of Transportation has created a website where citizens can provide input and learn more about the project. It is at www.assemblystreetrailproject.com.