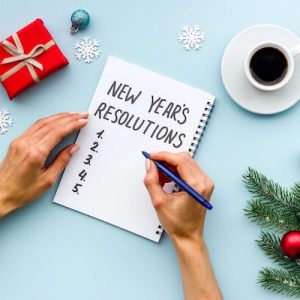 But why and when did this ritual begin?

The first New Year’s resolutions are said to date back more than 4,000 years to ancient Babylon. The Babylonians started the tradition during a 12-day New Year celebration called Akitu. During the Akitu festival, they would plant crops, pledge their loyalty to the king, and make promises to the gods to pay their debts and return any borrowed items. Babylonians believed that if they kept their word, the gods would look on them favorably for the year ahead. On the other hand, if they broke their promises, they believed they would fall on the bad side of their gods.

The history of New Year’s resolutions continued in ancient Rome. Emperor Julius Caesar introduced a new calendar in 46 B.C. which declared January 1st as the start of the new year. This new date honored Janus, a two-faced god who symbolically looked back into the previous year and forward into the new year.

Modern New Year’s resolutions are much more of a secular practice. Most people who participate in the process make resolutions to themselves. The focus of the ancient tradition has shifted to one of self-improvement, with people taking time to reflect on the past and create personal goals.

The symbology of the New Year makes it a great time to figuratively wipe the slate clean and start fresh on January 1st.

Topping the list of resolutions are health focused goals, perhaps driven by the indulgence of the holiday season.  According to a 2016 study, of the 41% of Americans who make New Year’s resolutions, by the end of the year only 9% feel they are successful in keeping them.

Why do so many people fail to keep their New Year’s resolutions?

Not having a plan is planning to fail.

The key to success with your resolutions is to set realistic resolutions and break them into is to small, tangible steps. Below are a few examples.

The top New Year’s resolutions trending for 2023 include:

What’s on your list of New Year’s Resolutions for 2023?