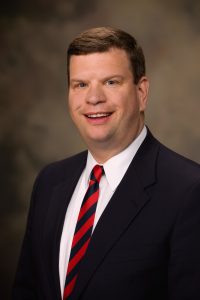 Bob Jones University Chief of Staff Randy Page was confirmed by the State Senate Tuesday, Sept. 22, to serve on the South Carolina Public Charter School District Board of Trustees. Page was nominated to the post by Governor Henry McMaster in February but the process was delayed due to the effects of the COVID-19 pandemic on the legislative schedule.

The Public Charter School District Board of Trustees is made up of nine members, two of which are appointed by the governor. The Board meets monthly and was established to create innovative solutions and provide oversight for public charter schools in South Carolina.

Page, who earned a BS in education from BJU in 1990, previously served as director of public events for Governor David Beasley, as legislative director for Lieutenant Governor Bob Peeler and as chief of staff to Lieutenant Governor André Bauer. He was awarded the state’s highest civilian award, The Order of the Palmetto, in 1998.

“My work with the Public Charter School District is another opportunity to be involved in the state and the local community,” says Page. “I’m looking forward to being a part of improving the quality of K-12 education in South Carolina.”