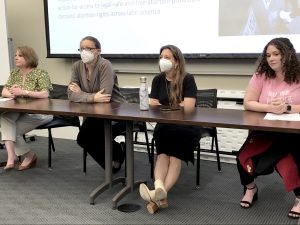 Political science professor Dr. Erin McAdams began with the news that Roe v. Wade, the landmark U.S. Supreme Court decision that protected a woman’s right to have an abortion, will likely be curtailed or outright overturned this year.

McAdams said the 1973 decision was based on the court’s interpretation of the U.S. Constitution that linked the right to privacy to other fundamental rights like individual liberty, freedom of speech, and freedom of association. But the Supreme Court also recognized states’ rights to regulate the health of a human fetus and establish limits based on how far a woman is into her pregnancy.

Conservative values, at the time, were focused on limited government and fewer regulations, McAdams said. However, in the 1980s, religious conservatives gained more influence in the GOP and pushed the party to support Roe v. Wade’s overturn.

“It created this very strange marriage of ideologies,” she said. “Let’s keep government small and limited in every other area – economics, social issues, welfare policies – but somehow big enough to fit into our bedrooms and our bodies.”

Republicans discovered, then, it was strategically sound for them to make abortion “a really big deal,” McAdams said.

When Donald Trump was elected president in 2016, he promised to appoint justices to the Supreme Court who will overturn Roe v. Wade. After naming three judges to the court, conservatives are on the cusp of getting what they want, McAdams said.

“The Supreme Court may not overturn Roe v. Wade, but it’s definitely going to modify it from where it is now,” she said.

History professor Dr. Jaclyn Sumner said she focuses much of her research on issues of race and gender in Latin America, where attitudes over abortion are changing.

“It’s really interesting to see that there have been incredible inroads made in Latin America recently,” she said. “Both Mexico and Colombia have decriminalized abortion, which is huge.”

Sumner said abortions have always been performed in Latin America – but only available to women in the upper class. She said she suspects the same will hold in the U.S. even if Roe v. Wade is struck down.

“When we outlaw something like abortion, we’re really not,” she said. “Abortion will always be available. It has always been available historically, so there is no way to get rid of abortion. All that abortion laws do in the United States and in Latin America is to make it less accessible and less safe for those populations it oftentimes involves.”

Sumner argued that stereotypes of people of color are consistently used to regulate women’s bodies, particularly impoverished women. She said that laws and policies governing abortion rights in Latin America and the U.S. share one thing in common, she said – the people who approve of them do not see women as agents in their own reproductive rights.

Sumner said that women of means would continue to have access to abortions regardless of the laws or regulations.

“Still, in the end, race and class determine whether or not you are an agent in your own reproductive health,” she said.

Economics professor Dr. Rachel Childers shared data on which women typically have abortions. Most are poor, and most are minorities. A majority are also religious – nearly a third of whom identify as evangelicals. Most are in their 20s, and only 4 percent are minors.

Title 10 funding cuts in Texas that closed family planning clinics throughout the state have led to a considerable increase in teen pregnancies and birth rates relative to the rest of the country, Childers said. She said the more family planning clinics that close, the longer distances women have to travel for care, which disproportionately affects women who live in poverty and cannot travel long distances.

“They are much more likely to experience financial insecurity in the long run, they are more likely to have bills to pay but they’re less likely, in the short run, to receive credit,” Childers said.

The final panelist, Clemson University graduate student Hannah Taylor, discussed the rhetoric of risk and choice when applied to abortion.

Taylor said people agree that it is better to have fewer abortions – but they do not agree on a woman’s right to have one. Abortion, she argued, is a stand-in for other issues in a society where there is uncertainty over the future.

“If it’s seen as risky, then it should be regulated,” she said.

Taylor also addressed the rhetoric of choice, especially the modern idea that because women can make choices, all they have to do is make good choices, and there are no problems.

Ultimately, Taylor said society must address all areas of injustice to reach a consensus on any issue.

“There is no reproductive justice without other rights and justice,” she said.