The Rev. Clementa Pinckney began his 4-H career at 9 years old with a focus on projects in public speaking and debating. Nearly four decades later, as his daughter Eliana spoke at his posthumous induction into the National 4-H Hall of Fame, it was clear his success in those project areas had been passed on to the next generation as well.

“He was a great orator, and Eliana is too,” S.C. 4-H Assistant Director Ashley Burns said.

And even after his death, Pinckney has continued passing traits he honed in 4-H as a youth on to future generations in South Carolina.

Along with sister Malana and on behalf of his wife, Jennifer, Eliana accepted the late senator’s induction for his lifetime achievements and contributions to 4-H into the National 4-H Hall of Fame at a ceremony in the nation’s capital. Honored by Clemson University and the South Carolina 4-H Youth Development Program, Pinckney was one of 20 people inducted during the ceremony held Oct. 12 at the Kellogg Conference Hotel at Gallaudet University in Washington, D.C. 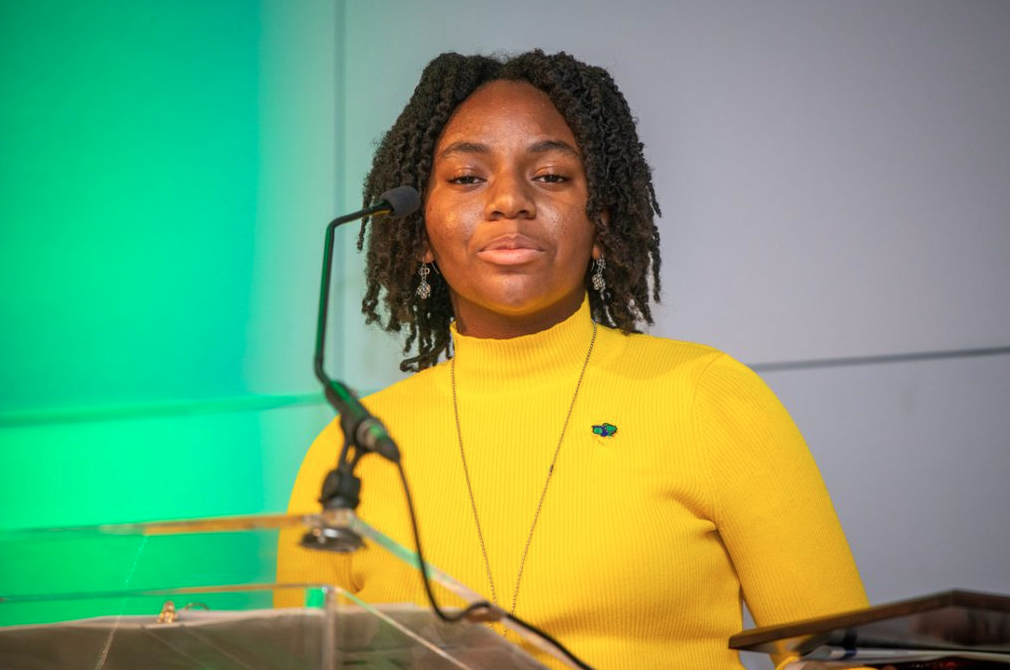 Eliana Pinckney said during the acceptance speech that her father, the late Rev. Clementa Pinckney, “not only had an impact on my life and the rest of my family’s lives, but that his impact and his legacy transcended beyond South Carolina and across the nation.” (Photo by Edwin Remsberg)

“As a young leader and a member of 4-H, it is incredible to know that somebody from South Carolina is being honored with this award,” Eliana said. “But as the daughter of Clementa Pinckney, it is incredible to know that my father not only had an impact on my life and the rest of my family’s lives, but that his impact and his legacy transcended beyond South Carolina and across the nation and now it’s reaching all of you.”

With that, Eliana gave special thanks for preserving his legacy to longtime and now-retiring S.C. 4-H State Director Pam Ardern and Rushawnda Olden, director of a program that bears his namesake: the 4-H Pinckney Leadership Program — just another way Pinckney’s legacy continues to impact young people in his home state.

“Both (Ardern and Olden) and the rest of South Carolina 4-H is working tirelessly every day for the last 6 years to make sure that my father’s legacy never dies and that it continues on with other younger 4-H’ers,” Eliana said.

On June 17, 2015, Pinckney was murdered in a racially motivated mass shooting at an evening Bible study at his church. Upon his death, the 4-H Pinckney Leadership Program was founded by the state legislators and is designed for middle and high school students to develop their leadership abilities and awareness in civic engagement and set forth the standards and principles valued by Sen. Pinckney.

The program’s goals are to empower youth to serve with compassion, lead with humility and to inspire others through integrity equipping them to be strong leaders, positive role models and engaged citizens.

“Eliana spoke to his tribute and the legacy he made in the 4-H program and South Carolina at large,” Burns said. “He made his mark in South Carolina in so many different ways, and as one small tribute, naming the 4-H leadership program in his memory is one significant way that we can do that. And the program has just grown by leaps and bounds, and obviously Rushawnda has done a tremendous job in taking it to the next level, and hopefully he would be very proud of what we have done.”

The National 4-H Hall of Fame honorees are nominated by their home states, National 4-H Council; the National Association of Extension 4-H Youth Development Professionals (NAE4-HYDP); or the Division of Youth and 4-H, United States Department of Agriculture’s (USDA)National Institute of Food and Agriculture (NIFA) based upon their exceptional leadership at the local, state, national and international levels.

After beginning his 4-H journey at 9, Pinckney was club president and ambitiously participated in citizenship activities, the corn muffin contest, the poultry barbecue contest and other 4-H projects. He was the state winner in the 4-H Public Speaking Contest.

Pinckney’s 4-H agent as a youth characterized him as extraordinarily kind-hearted, a trait that she believed was embedded in his genes. And in 1996, Pinckney became the youngest African American man elected to the South Carolina General Assembly in the House at the age of 23. He was elected to the Senate in 2000, where he served until his death.

While serving in the General Assembly, Pinckney was a strong advocate for black rights throughout his career. Each year during the 4-H Legislative Day, Sen. Pinckney would always ask to share with the youth. He attributed his leadership and public speaking skills to 4-H and would tell groups the 4-H Motto, “Learn By Doing,” and how it helped him. He never forgot his 4-H experience and remained a great 4-H supporter.

“The Pinckney Leadership Program has been a tremendous shining light in how we can get kids involved in 4-H, involved in a leadership program and involved in discovering their own potential,” Burns said. “So, when they go back to their home communities, they can take over some of those leadership roles that they have not necessarily thought of themselves in before. It’s really been a great pathway for kids who may not have been involved in 4-H before, they come to the Pinckney Leadership Program and see what all is involved in 4-H and they can engage. Similarly, some kids who have already been in 4-H but not really understood their leadership potential until going through that program have gone the extra mile afterwards.”