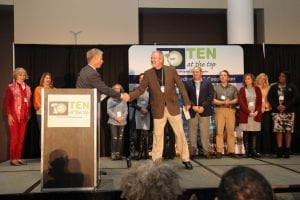 The Powdersville Business Council for their Rhythm on the River event and Main Street Laurens for the Piedmont Blues and Roots Music Festival were the $5,000 recipients of the 2019 Hughes Investments Elevate Upstate Grants as announced by Phil Hughes during Ten at the Top’s 10th anniversary event on November 20th. Hughes also pledged to give $1,000 each to the other three finalists if they complete their proposed projects.

Rhythm on the River, a community event designed to bring families and businesses together in the Powdersville community, will take place on May 2, 2020, at Dolly Cooper Park with family activities, music, and food trucks.

Piedmont Blues and Roots Music Festival will take place in downtown Laurens on May 9, 2020, celebrating the Piedmont Blues music that has roots in Laurens.

The other three finalists were A Common Thread: Textiles Past and Present (Arts Center of Greenwood), Trains on Main (Main Street Clinton SC), and Peg Leg Bates Dance Showcase (City of Fountain Inn).

The five finalists were chosen from a total of 23 applications submitted for the two grants available in 2019. Hughes Investments contributes at least $10,000 per year to the program with two recipients each year receiving $5,000 to support a new vibrancy initiative in the Upstate. The program began in 2013 in conjunction with a series of Community Vibrancy Workshops hosted by Ten at the Top. Since the inception of the grants program, Hughes Investments has contributed a total of $93,000 to 29 community vibrancy initiatives across the Upstate.