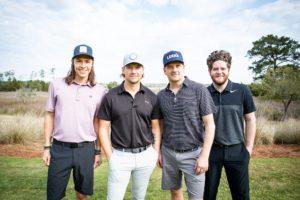 Sponsorships and foursome registrations are now available for the 2020 NEEDTOBREATHE Classic set for March 30 at the Daniel Island Club.

Each year, musicians, athletes and actors join southern rock band NEEDTOBREATHE for a charity golf classic plus auction and after-party concert to support the work of OneWorld Health. The Charleston-based nonprofit empowers communities around the world to achieve long-term improvements in health and quality of life. OneWorld Health has built 12 medical clinics in Uganda and Nicaragua, helping hundreds of thousands of people receive life-saving medical care.

Those interested in registering for a celebrity foursome, standard foursome (no celebrity) or a standard single spot can take advantage of early-bird pricing through Nov. 1. Sponsorship opportunities are also available. Information and registration details are at www.commonwealthcares.org.

“Each year, the NEEDTOBREATHE Classic welcomes an amazing lineup of athletes, musicians and sponsors united around a common theme of bringing life-saving medical care to those around the world,” said Britt Gilbert, founder of Commonwealth Cares Foundation. “Our 2019 golf classic was one for the books, and we can’t wait to see what’s in store for next year’s event.”

ABOUT COMMONWEALTH CARES FOUNDATION
Founded in 2007 as a 501(c)(3), Commonwealth Cares Foundation is the charitable arm of Commonwealth, a Daniel Island-based comprehensive financial services firm with a division focused on providing financial planning services to physicians and the medical community. The firm brings a values-based philosophy, offering clients independent advice through a consultative, team-oriented approach. For more information, visit commonwealthcares.org.

H A R D L O V E is the follow-up to Rivers In the Wasteland, which debuted at #3 overall on the Billboard 200 and spawned the RIAA-certified Gold single “Brother (feat. Gavin DeGraw).” The hit earned the group their first GRAMMY nomination as well as a pair of Billboard Music Award nominations.

NEEDTOBREATHE, well known for the aggressive touring schedule and impressive live show, celebrated four consecutive sold-out shows at Red Rocks Amphitheatre, as well as sell outs at Greek Theatre (Los Angeles), Ascend Amphitheatre (Nashville), Aragon Ballroom (Chicago), Verizon Theatre (DFW) and more. Last July, NEEDTOBREATHE released their 4-track EP Forever On Your Side (Niles City Sound Sessions), which includes the single “Forever On Your Side (with JOHNNYSWIM),” and is the product of a 10-day recording session at Niles City Sound in Fort Worth, Texas (the famed location where Leon Bridges’ GRAMMY-nominated debut Coming Home was recorded).

NEEDTOBREATHE released their first-ever fully acoustic album – Acoustic Live Vol. 1 – in November 2018. The album, which was entirely self-recorded, produced and mixed/ mastered, represents over a decade of music from the GRAMMY-nominated band, with songs spanning across five of their six studio albums. For more information, visit needtobreathe.com.

ABOUT ONEWORLD HEALTH
Our vision is to see impoverished communities take ownership in a sustainable healthcare model, so that they become empowered to bring about long-term change and tangible improvements in their health and quality of life. Our mission is to provide quality, affordable healthcare to people in need. We have developed a model that provides affordable health care to the communities who need it most and does not require ongoing support to keep the doors open. Each OneWorld Health medical center offers a full scope of healthcare services to the community, delivered by trained nationals and offered at a price point that is affordable to the overwhelming majority of the population. Patient fees offset the costs of running the clinic, eventually meeting or exceeding the total monthly operating costs. For more information, visit oneworldhealth.com.