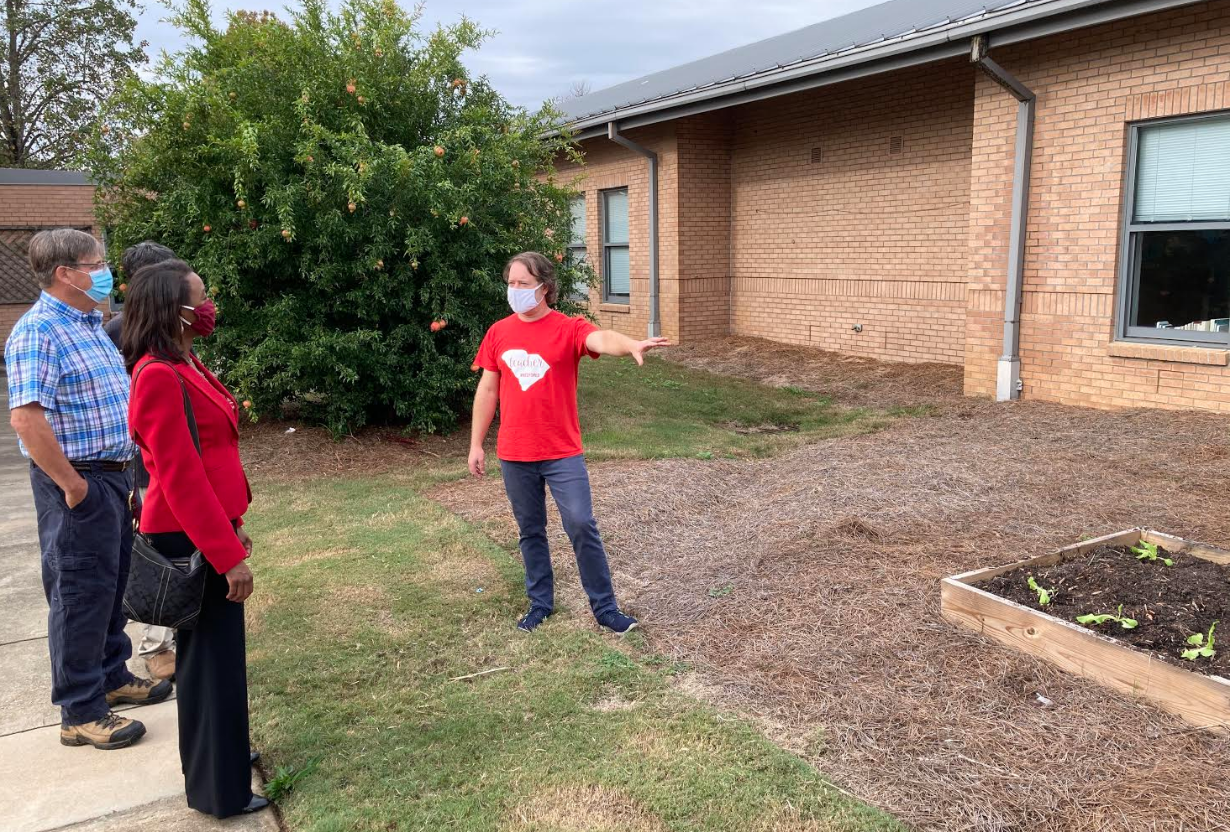 Jamison Browder, a pre-kindergarten educator who has secured several grants for campus gardening projects, has been named the County’s Conservation Teacher of the Year by the Richland Soil and Water Conservation District (RSWCD).

Browder leads environmental education initiatives at Meadowfield Elementary School in Richland County School District One, where he has coordinated multiple gardening and bird-watching projects. Along with integrating gardening into the classroom, Browder has used technology and Socratic seminars to better engage students.

In nominating Browder for the award, Julie Stensland, an instructional coach at Meadowfield, called him “a true leader in the field of early childhood environmental education, not only for the students he has served, but with his colleagues as well.”

On Wednesday, Browder was honored during a presentation at the school.

“You don’t look for an award because you get that from the student reaction when they grow a plant, but it was quite nice,” he said of the honor.

Browder will receive a $100 cash award and a $500 Conservation Education Mini-Grant to further Meadowfield Elementary’s conservation projects. He also advances to the statewide Conservation Teacher of the Year competition, sponsored by the S.C. Association of Conservation Districts.

Last year, Browder led the charge to acquire a farm-to-table grant for his school. The grant spawned a gardening project in which 4-year-old students learned to grow onions, lettuce and herbs.

Browder, who has worked in early childhood instruction for 12 years and advocates for student-driven, project-based learning, has received several other grants to sustain campus gardening initiatives, including Conservation Education Mini-Grants from the RSWCD.

In addition to his work and projects at Meadowfield, Browder is heavily involved in the community, serving as lead gardening teacher for the state Department of Education’s School Gardening for S.C. Educators program. He is also school coordinator for the Slow Food Columbia “Ark of Taste” gardening initiative, which focuses on growing at-risk foods that face extinction.

In 2015, Browder helped organize the World Organization for Early Childhood Education’s annual conference in Washington, D.C., which invites educators from around the globe to discuss environmental concerns and initiatives.

Browder recently received his Ph.D. in education from the University of South Carolina, where his dissertation focused on the lived experiences of early childhood gardening teachers. He has written several scholarly articles on the subject, including a collaboration that earned a “best overall paper” award at the 2016 World Symposium on Sustainable Development at Universities. The paper was later published in an international handbook on sustainability.

“Whether he is working with students or adults, Browder portrays himself in a confident, passionate and professional manner that entices people to join conservation and planting efforts,” Meadowfield Principal Lisa Davis said. “His dedication and compassion are exemplary in every way.”