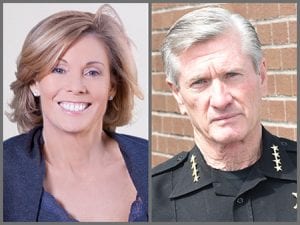 An informational one-pager describing PTSD, produced and published by the Richland County Sheriff’s Dept. (RCSD) is being disseminated far beyond the near-1,000 employee agency it was originally designed for in 2018.

Describing the symptoms of post-traumatic stress disorder or post-traumatic stress injury (PTSI) through a series of colorful emojis along with bulleted information, the single sheet is being forwarded over the next week to ― for use by ― 3,000 sheriffs’ offices and 14,000 police departments across the U.S., including large metropolitan police departments like NYPD and LAPD.

“This easy-to read single sheet has been an important part of our creating a greater awareness within the department of what PTSD or PTSI actually is,” said Sheriff Leon Lott, who in 2016 instituted a pre-PTSD conditioning program – CRITICAL INCIDENT AND PTSI AWARENESS TRAINING – which all RCSD deputies have since been required to undergo before any of them ever hit the street. The pre-PTSD program was the first-of-its-kind established in the U.S., and has since become a model for other agencies, nationwide.

“This sheet and all of our PTSD and PTSI-related programs benefit our deputies, their families, and the citizens and the communities we all serve,” said Lott, who has directed that those within RCSD to refer to the disorder as PTSI.

Lisa Broderick is the executive director of Police2Peace, which provides officer wellness programs and tools, and is facilitating an element of RCSD’s PTSD training curriculum, taking it nationally, and incorporating the sheet as the primary centerpiece of the overall training.

“This is the kind of innovative work we need to see more of across the country in terms of modern policing and within the culture of the same,” said Broderick. “This training sheet and all the other creative things Sheriff Leon Lott and the Richland County Sheriff’s Dept. are doing in so many related and unrelated ways represent the future of law enforcement.”

Broderick adds, “If you’re a Peace Officer agency, you are focused on officer wellness. That’s what the Richland County Sheriff’s Dept. demonstrates so powerfully with this simple innovation.”

The sheet has been regularly published in RCSD’s official in-house magazine. It has also been used by psychologists at the Dorn VA Medical Center in Columbia, S.C. as well as several military veterans organizations: Among those are Veteran One, the WLS Foundation, the Combat Veterans Support Group; and Senior Resources, an elderly outreach non-profit serving central S.C.

In 2021, the sheet was the subject of a feature in POLICE1, one of the nation’s leading law-enforcement publications.

The interest, according to Smith, is largely because PTSD (PTSI) is an unusual multi-symptomatic disorder which is only marginally grasped by the general public, yet his sheet, he says, explains it simplest terms.

“PTSI or PTSD is a little understood mental and emotional malady which transcends into the physical,” said Smith. “Most people associate it with combat soldiers returning home from overseas deployments. And it is. But anyone who has endured extreme trauma, like that experienced in combat, is susceptible. And no one is more susceptible than a police officer or a deputy sheriff who constantly deals with stresses and traumas closely paralleling what soldiers experience overseas.”

Smith says his goal in developing the information sheet was to provide a means of communicating to others what PTSD or PTSI is. “It’s not simply depression, anxiety, anger, guilt, or hyper-vigilance,” said Smith. “It is all those things simultaneously, and it’s all the time. It’s like an adrenaline surge that never ends.”

“Though not all combat veterans suffer from PTSD, anyone who has ever been in a combat zone is certainly changed forever in some way,” said Vitali, who previously chaired the S.C.-based Combat Veterans Support Group. “What Tom has created is not only simple to understand, but uniquely creative in terms of both educating outsiders who know nothing of PTSD and serving as an icebreaker for combat veterans, many of whom stubbornly refuse to open up to counselors much less anyone else who has never experienced what they have experienced. This would almost certainly be the same for police officers.”

POLICE2PEACE is an Arizona-based non-profit organization that operationalizes innovations around community policing.