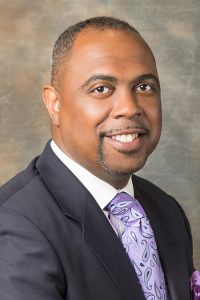 Jamie L. Devine, a member of the Richland One Board of School Commissioners, was installed as president of the South Carolina School Boards Association (SCSBA) during the association’s annual Delegate Assembly held Saturday, December 4 in Charleston.

The association’s annual business meeting, which was held as part of the association’s Legislative Advocacy Conference, included voting delegates from most of the state’s 77 school boards. In addition to the election of association officers, delegates adopted resolutions to guide the association during the 2022 legislative session and approved proposed changes to the SCSBA Constitution and Bylaws.

Devine was elected to the Richland One Board in 2008. He has been a member of the SCSBA board since 2012, serving as Region 8 Director, Secretary, Secretary/Treasurer and President-elect.

He has achieved Level 6 in the SCSBA Boardmanship Institute Program and will be recognized for this accomplishment during the 2022 SCSBA Annual Convention.

In addition to his school board responsibilities, Devine is the president of Community Assistance Provider, a non-profit focused on providing safe and affordable housing and economic opportunities for low- to moderate-income individuals and families throughout 15 South Carolina counties.

Devine serves on numerous boards, commissions and civic organizations in addition to the Richland One and SCSBA boards, including the Indian Waters Council (Boy Scouts of America) and the North Columbia Business Association (NCBA). Devine is a member of the 100 Black Men of Greater Columbia, Inc. He is also a 2003 graduate of Leadership Columbia and is a member of the 2007 “20 under 40” class presented by The State newspaper.

His contributions to his community are further expressed through his work with his church, Brookland Baptist Church, and his fraternity, Omega Psi Phi.

He is married to the former Tameika Isaac, and they reside in downtown Columbia. They have two daughters and one son.

In addition to Devine, other officers and regional directors elected to lead the association on the board of directors are as follows:

The South Carolina School Boards Association is a non-profit organization serving as a source of information and as a statewide voice for boards governing the state’s 77 school districts.