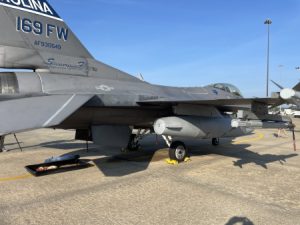 The South Carolina Air National Guard’s 169th Fighter Wing, which has been operating out of the Columbia Metropolitan Airport (CAE) since April due to runway renovations at McEntire Joint National Guard Base, will be extending their flight training operations at CAE for several weeks, SCANG officials announced today.

“When we started the renovations of our main runway in April, we had expected that this project would take approximately six months and consequently we had been aiming for an end of October completion date,” said Col. Quaid Quadri, 169th Fighter Wing Commander. “However, due to unforeseen circumstances during the construction process, we have had to adjust the completion timeline and will be staying at Columbia Metropolitan Airport several more weeks,” Quadri said.

Unanticipated conditions during the demolition of the existing runway at McEntire Joint National Guard Base created additional work which dictated more time required to finish the project, Quadri explained.

The 169th Fighter Wing has been conducting its flight training operations as well as supporting its 24/7 homeland defense mission from Columbia Metropolitan Airport in Lexington County since April. Approximately 200 military personnel from the SCANG have been working at Columbia Metropolitan Airport at any one time during the week. On drill training weekends, the number of SCANG personnel at the airport is closer to 300 people. The vast majority of SCANG personnel remained and will continue to remain at McEntire Joint National Guard Base for their work.

“We understand the challenges with large-scale projects and invite our partners with the South Carolina Air National Guard to continue this temporary relocation as long as they need,” said Mike Gula, Executive Director at CAE. “Our ultimate goal is to ensure we’re supporting our military community in every way we can. We appreciate our community’s patience and understanding during this temporary relocation and ask they continue enjoying the sounds of freedom here at CAE.”

“We appreciate the overwhelming support we have received from Columbia Metropolitan Airport as well as all our community partners. We are grateful for everyone’s patience and understanding as we strive to move our jets from CAE and back to McEntire as soon as it’s feasible,” Quadri said.

About the Columbia Metropolitan Airport