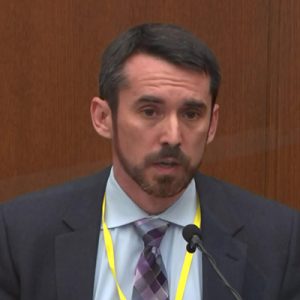 Seth Stoughton, a professor at the University of South Carolina School of Law, was called as a witness in the trial of Derek Chauvin, the former Minneapolis, Minnesota, police officer who is accused of the murder of George Floyd. Stoughton, the last witness for the prosecution, was on the stand for almost three hours on Monday, April 12, answering questions on national police use-of-force standards.

As both a law professor who has studied various aspects surrounding the regulation of policing and a former patrolman in the Tallahassee, Florida, police department for five years, Stoughton was able to speak not only as an academic but also from his personal experiences as an officer.

He began his testimony by defining his research on police uses of force, including his four-step process for evaluating and analyzing use of force methods:

1. Identifying the relevant facts and circumstances as viewed through the lens of a “reasonable officer”
2. Assessing the threat, if any, presented by the individual’s actions
3. Assessing the foreseeable effects of the officer’s use of force
4. Determining, in light of the facts and circumstances (step one), were the foreseeable effects of the officer’s use-of-force justified and reasonable (step three) because they were proportional and appropriate to the threat presented by the individual (step two).

“A use of force that is sustained over a period of time does have to be reasonable at the time force is initiated… and throughout the duration that force is being used,” he said.

Using relevant clips from available body-cam footage, Stoughton walked through his use-of-force evaluation in this particular case, highlighting what steps a “reasonable officer” should have taken to avoid bringing harm to Mr. Floyd.

At one point, following a clip of one officer checking and failing to find a pulse for Mr. Floyd, prosecuting attorney Steven Schleicher asked Stoughton what he saw that was relevant to his evaluation.

“Someone who does not have a pulse does not present a threat,” answered Stoughton.

Concluding his evaluation, Stoughton summarized that, “The use of force had the foreseeable effect and substantial likelihood of resulting in death or great bodily harm,” and “No reasonable officer would have believed that that was appropriate acceptable or reasonable use of force.”

Stoughton was the principal author of “Evaluating Police Uses of Force,” which was published in May 2020, the same month as Mr. Floyd died. Stoughton’s co-authors included University of South Carolina criminology professor Geoffrey Alpert and police consultant Jeffrey Noble.

More information about the book can be found at https://nyupress.org/9781479814657/evaluating-police-uses-of-force