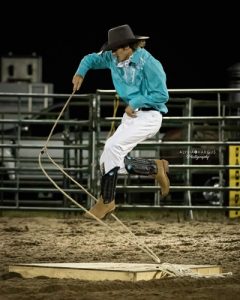 If you’re old enough to remember Will Rogers, or movies from the heyday of Westerns, you know all about the deft artistry of masters of the lasso, although you probably haven’t seen it for awhile.

And if you’re not that old, well, you’re in for a treat.

That’s because lasso demonstrations will happen repeatedly throughout the day when the South Carolina Confederate Relic Room and Military Museum presents the 2021 edition of Palmetto/Lone Star Day. It will be on Saturday, Oct. 23, the same day the South Carolina Gamecocks face the Aggies of Texas A&M.

Maybe you can’t make it to Kyle Field in College Station, but you can come to the museum and join us in another celebration of the many historical and cultural connections between the great states of South Carolina and Texas.

We did this once before, in 2019, and visitors met historical re-enactors from the 1830’s “Texian” era, though the 1916 deployment of South Carolina soldiers near El Paso during the “Blackjack” Pershing’s Punitive Expedition against Pancho Villa. We all remembered the Alamo, and the 13 South Carolinians who fought and perished there. And we learned more about what a Western gunfight was really like.

And now we’re doing it again, only with some different elements thrown in – such as the aforementioned lasso artist.

10:00 a.m. – Opening of event, including a presentation of South Carolina and Texas colors.
10:30 a.m. – First lasso demonstration by Bill Small, a lasso artist who has appeared at numerous rodeos.
11:00 a.m. – Education room presentation: “Guns of the Western Settlers; The Guns That Really Won the West.” The presenter is Kevin Krist, a retired attorney whose love of shooting sports and historic firearms led him to membership in the National Congress of Old West Shooters.
High Noon – Historic gunfight re-enactment at building entrance.
12:30 – Alamo presentation by Richard Peterson. Will talk about the Bonham Trophy, a statue of a South Carolina hero, James Bonham. He carried the message out seeking, then doomed himself by riding back with the news there was no help coming. Trophy awarded each year to winner of the Gamecocks/Aggies football game.
1:30 p.m. – Kid’s costume roundup.
2:00 p.m. – Second lasso demonstration.

And throughout the day, these things will be going on:

So climb into the saddle – or into your sedan or SUV or whatever – and ride on down to the river and join us.