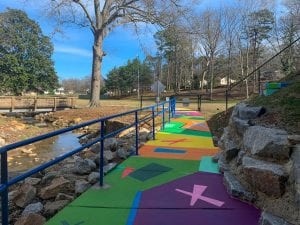 Chapman Cultural Center announces the completion of a new public art project that features a unique walkway mural between Cleveland Park and Berry Field. The walkway mural was a collaborative project initiated by Spartanburg County Parks and Recreation, managed by Chapman Cultural Center, and created by artists Frankie Zombie and Adrian Meadows. The goals of the project were to create a brighter, safer, more pleasing walkway for pedestrians; to increase the inventory of public art in Spartanburg; and engage with local artists while providing opportunities for collaboration, innovation, and professional development. A public celebration and ribbon cutting, is scheduled for February 10, from 4:00 to 4:30pm.
.
The artwork was designed and installed by local artists Frankie Zombie and Adrian Meadows. After a countywide call for artists, the team’s design was selected, among 8 applicants, and the walkway mural was painted over the course of December and January.
.
Born in and raised in Spartanburg, SC, Adrian Meadows (alias To Aspire) is a graphic designer, hand lettering and mixed media artist. Adrian has collaborated with numerous companies such as Adobe Photoshop, Car & Driver Magazine, BuzzFeed News and Makeup Forever. Adrian has also been featured in multiple national and international typography focused books such as GoodType: The Book, Vol 1. and Typism: Vol 3. He believes that art is the most impactful language we have and that people who like guacamole cannot be trusted.
.
Born in New York City and raised in Spartanburg, SC, Frankie Page (alias Frankie Zombie) is a mixed media artist and music producer in Spartanburg, South Carolina. Frankie has collaborated with musical artists such as Pharrell, Miley Cyrus and John Legend to name a few. The collectors of custom Frankie Zombie apparel pieces span from New York City to Atlanta, to London; and his art has reached influencers such as Jon Wexler of Adidas, and Pusha T. His current color balance style was birthed after his mother was suddenly diagnosed with Breast Cancer in 2016, prompting his return to Spartanburg. Frankie’s art focuses around positive energy, race relations, spirituality, and health. He prescribes to the notion that individual energy determines how the world changes.
.
“Spartanburg County constructed the underpass to create a safe pedestrian walkway under Asheville Highway that connects Berry Field to Cleveland Park. We were extremely excited to be able to partner with the Chapman Cultural Center to activate and transform this space from a walkway into a destination that will be an attraction for Spartanburg. Frankie Zombie and Adrian Meadows did an amazing job creating the mural, and we appreciate their commitment to improving the community,” said Kevin Stiens, Parks and Recreation Director with Spartanburg County.
.
“I’ve worked with Frankie and Adrian on a few different projects now, and they’re always such a delight. Their messages unite, inspire, and heal, and their talents are unmatched. The space between Berry Field and Cleveland Park has been utterly transformed from somber, grey concrete to joyous and vibrant color, and rhythmic pattern. This is truly a unique and wonderful gift they’ve bestowed upon the people of Spartanburg. When you see it, I guarantee your day will become brighter and your spirits will be lifted,” said Melissa Earley, Community Impact and Outreach Director with Chapman Cultural Center.
.
With the completion of the Cleveland Park Walkway Project, Chapman Cultural Center hopes that Spartanburg County will continue to see the addition of public art as a catalyst for safer communities, beautiful spaces, and support for our local creatives.
,.
“Chapman Cultural Center is committed to developing and promoting the significance of the arts in Spartanburg County. With the implementation of the Creative Crosswalks in downtown Spartanburg, and now the walkway at Cleveland Park, we hope to continue the trend of public art additions throughout the County. The strength of Spartanburg County’s creative culture is another reason why Spartanburg is at the forefront of being an interesting place to live, work, and enjoy the arts,” said David Ocasio, Marketing and Communications Director with Chapman Cultural Center.
.
.

Our mission is to provide cultural leadership for Greater Spartanburg by developing, strengthening, and promoting the scope, excellence and educational role of the arts, humanities and sciences, and to further their significance in the life of our community. Visit our website to learn more.