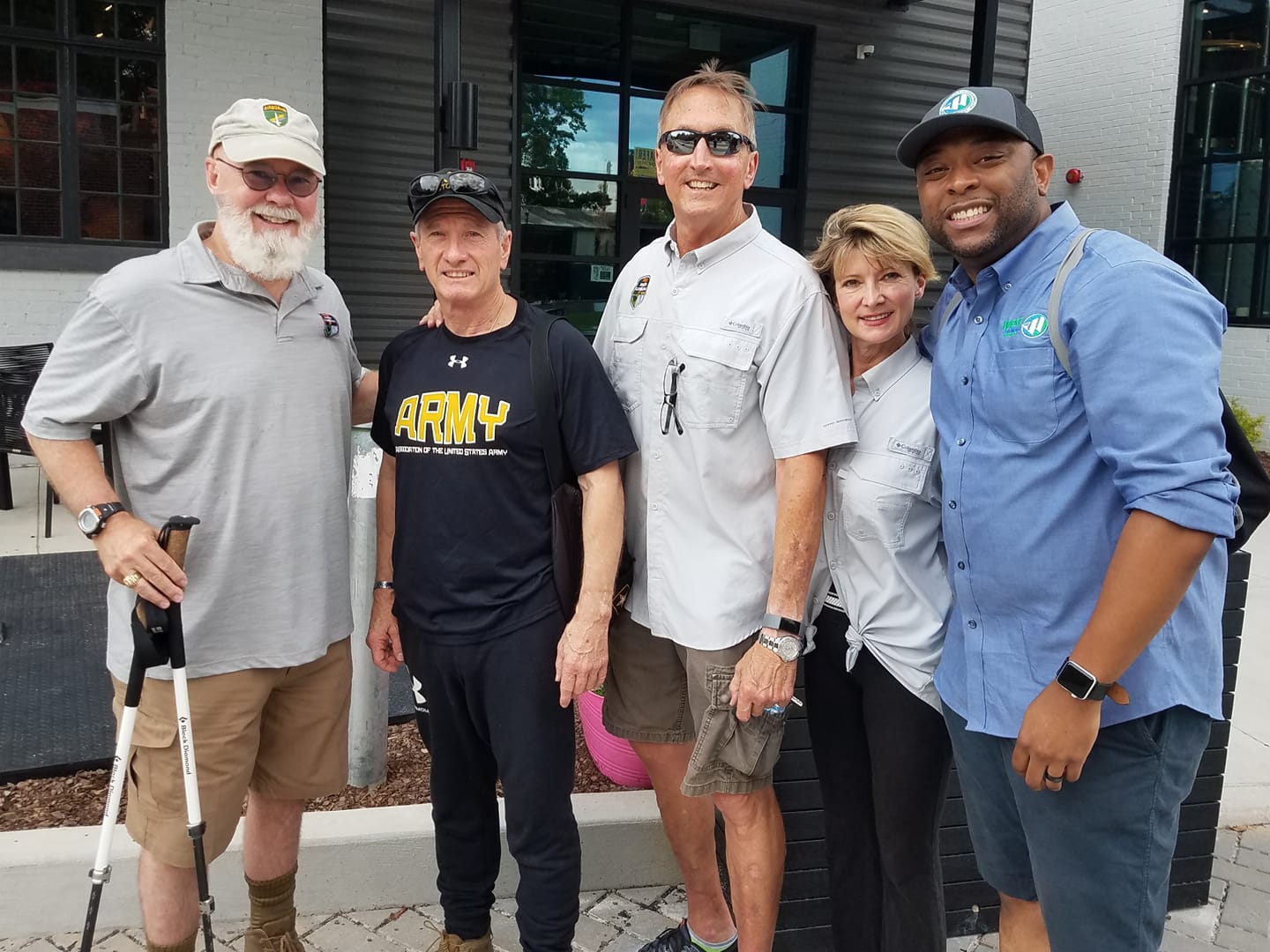 Throngs of Midlands-area participants with the SOUTH CAROLINA SEVEN (SC7) expedition, a statewide trek from the mountains to the sea, gathered Thurs. evening, July 15 at Savage Craft Aleworks in West Columbia to celebrate military veterans along the trail. The all-ages group met at Savage Craft following a brisk hike, partially in the rain, on the west side of the Congaree River along the West Columbia Riverwalk. Many of the participants were military veterans from all branches of service.

“So many military veterans have been with us so far from general officers to junior NCOs – many of whom are combat veterans from the wars in Iraq and Afghanistan – and all of whom have expressed to me the value of returning to the natural rhythms and quiet, still-rustling of the outdoors,” said global expedition leader Tom Mullikin, who has been leading the second-annual SC7 since early July. “Journeys like this are truly soul-restorative. Not to mention the fact that hiking the passes, paths, and byways of South Carolina are a means by which we create greater awareness of the unique natural wonders our state has to offer and determine how best to protect them for future generations.”

The month-long SC7 expedition – primarily hiking, but also rafting, kayaking, and SCUBA diving – began in the Upstate, July 1, and will conclude in Charleston, July 30. Along the way, Mullikin and other experts are showcasing the state’s seven geographic wonders explored and observed along a unique trek closely paralleling several hundred miles of the famed Palmetto Trail.

“This is such a wonderful thing that we do every year in July,” said Lt. Governor Pamela Evette as the expedition passed through Newberry earlier in the week. “We’re focusing our attention on all of the beautiful hiking trails and beautiful landmarks we have around S.C. What we are doing here in Newberry shows that even in urban areas we have wonderful trails.”

Following the Newberry day-hike, a premiere showing of the documentary film HIGHER GROUND was held at the Newberry Opera House attended by Lt. Gov. Evette, her husband David, and Gov. and Mrs. Henry McMaster among other dignitaries. HIGHER GROUND chronicles much of Mullikin’s work over the years, primarily last year’s SC7.

Mullikin conceived, planned and is now directing SC7 as he did in July 2020. A former U.S. Army officer, retired major general in the S.C. State Guard and current chair of the S.C. Floodwater Commission, Mullikin has spent much of the last four decades traversing every continent on earth, climbing mountain ranges of the world’s seven tallest peaks (including reaching the summits of more than 20 mountains across the globe) and logging SCUBA dives in all the world’s oceans.

Two school buses furnished by Palmetto Outdoor, an area whitewater outfitter, ferried hikers to-and-from the Riverwalk trailhead in Cayce where they were greeted by Cayce Mayor Elise Partin then back to Savage Craft.