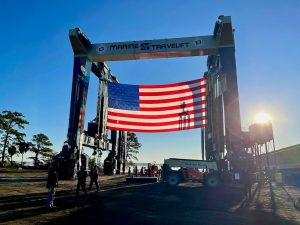 YONGES ISLAND, S.C. – In a ceremony reminiscent of a large ship christening, Stevens Towing Company– a family owned business based in South Carolina– officially launched into service one of the largest Marine Travelifts in the Southeast. The giant lift, 70 feet high by 87 feet wide, is capable of lifting 820 tons and barges up to 60-feet wide. It is entirely American made.

The construction of this world-class marine lift spanned several months.

The event featured remarks from company President Johnson Stevens and Dockmaster Lem Boykin, and a traditional christening ceremony to officially launch the massive lift into service on Thursday, October 20.

This milestone win for Stevens Towing will greatly benefit the booming Charleston shipping and maritime industry. Stevens Towing provides vital repair services for vessels across the east coast, including in The Port of Charleston, which was recently deepened to 52 feet to allow the passage of larger ships. This lift will make servicing these vessels possible.

“We are honored to welcome partners and leaders from our community to christen our Marine Travelift,” said Stevens Towing Company President Johnson Stevens. “This is a huge accomplishment for our business, and will help us continue our legacy of providing good jobs and supporting the maritime industry here in Charleston. In addition to the significance this has for our business, it’s also near and dear to our family’s hearts. We’ve named this lift Susan G. in honor of my mother, and it stands next to our other lift named for my late father, Captain Bill. We are so grateful to everyone who helped make this a reality.”

The lift was made possible in part by a bi-partisan coalition of South Carolina elected officials offering their support for a $1,378,575 grant from the U.S. Department of Transportation’s Maritime Administration (MARAD), which was awarded to Stevens Towing in July of 2021. Key supporters included Congressman Jim Clyburn, Senator Tim Scott, Congresswoman Nancy Mace, State Senator Chip Campsen, and Meggett Mayor Buster Herrington. The family-owned business is one of 31 shipyards nationwide, and the only one in South Carolina, to receive this modernization funding in 2021.