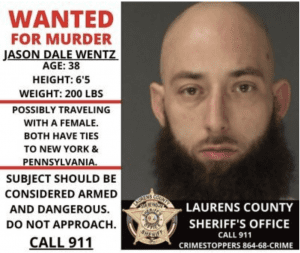 On September 11th at approximately 9:45PM, deputies responded to the 100 block of Garth Road in Fountain Inn in reference to an individual who had suffered a gunshot wound. Upon arrival, deputies discovered 33-year-old Wilton Latravous Webb deceased at the residence. Investigators are currently seeking 38-year-old Jason Dale Wentz of Fountain Inn in connection to this crime.

Wentz is wanted for Possession of a Weapon During a Violent Crime and Murder. He is pictured here and is described as being a white male, approximately 6’5, and weighs 200 pounds. It is possible that Wentz no longer has facial hair. He could be traveling with a female and both individuals have ties to New York and Pennsylvania. Wentz is also wanted in Pennsylvania in connection to an Attempted Murder.

If you know of his whereabouts, call 911. Subject should be considered armed and dangerous. Do not approach. This is an active investigation and Investigators are working diligently on this case. Details will be released as they are made available without hindering the investigation. We appreciate the cooperation of the public.