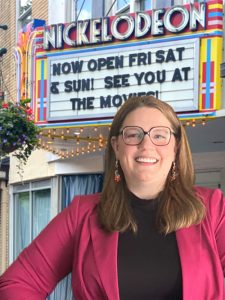 Sumner Bender, an educator in Lexington-Richland School District 5 and president of the board of Trustus Theatre, will become the new executive director of The Nickelodeon arthouse theater on June 6.

She is the first named permanently to the position since last August.

The Columbia native has been the theater teacher at Spring Hill High School for six years, and is now responsible for all professional development for theater educators in the district. She has been a member of the Trustus board since 2011.

“The arts community in Columbia is my home,” said Bender, 39, and she sees The Nickelodeon as an indispensable part of that community. “The Nick, let’s be honest, is very cool… I want to make sure that institutions like The Nick will always be around.”

“We were looking for a transformational, visionary cultural leader who had expertise in many different areas,” said Charmaine Clowney, vice president of the Nickelodeon board and an attorney who consults in the area of diversity and inclusion. “She will be embraced by many diverse communities in Columbia and beyond. I hope that we can keep her.”

“The search was conducted by a diverse group of individuals, including board members and community stakeholders,” Clowney said. “The committee sought someone with excellent leadership skills, including an ability to manage diverse teams and to coach for success.”

A capability to engage the full range of local communities was also very key, she said.

The Nick “has to be inclusive,” said Bender. That means “You have to respect the base that has got you where you are, but make sure others feel represented and welcome. I have done that well in the past.”

She also faces the challenge of running a movie theater after two years of COVID, and in competition with a growing army of video streaming services. But she’s not worried, especially after her time with Trustus, since “live theater has been ‘dying’” ever since film came along. She believes The Nick provides something unique. “There is absolutely nothing like a shared experience. People want popcorn and beer, and they want to watch movies with their friends.”

She looks forward to being involved, hands-on, with every aspect of providing that experience. “I want to pop popcorn on Friday night, if popcorn needs to be popped.”

Jada Willis, whose human resources consulting firm advised the board during the search process, said Bender stood out both “from an energy perspective,” and in terms of “having the background knowledge” and understanding “the importance of The Nick to the community.”

“She has such a passion, and a love of theater and the arts,” said Willis. “This is way more than a job. This is her life.”

Founded in 1979 as South Carolina’s only nonprofit arthouse cinema, The Nickelodeon serves the Midlands region of South Carolina as a center for critical dialogue, presenting films that showcase the diversity, challenges, joy, and aspirations of the community. Its two screens on Columbia’s Main Street draw more than 70,000 attendees into the heart of the city annually. Those screens show a mix of first-run independent and foreign films, and present curated series and special community screenings. Learn more at https://nickelodeon.org/.