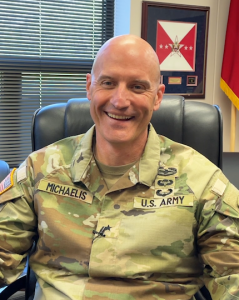 The Who’s on the Move Leadership Series highlights people leading extraordinary change in South Carolina. We will be focusing on the journeys of 12 top leaders per year from across the state with a short video as well as a full audio version of the conversation. The interview will also be available on Apple and Spotify. Just search for the Who’sOnTheMove SC podcast.

You will see a diverse group of leaders in this series, men and women, white and non white, old and young – entrepreneurs, leaders of academics institutions, executive directors of non profits, and others.

Brig. Gen. Patrick R. Michaelis is a Distinguished Military Graduate from Texas A&M University and was commissioned a second lieutenant of Armor in 1993.

Michaelis received a Bachelor of Arts in history from Texas A&M University; a Masters in Public Administration from the Harvard Kennedy School of Government and a Masters in Strategic Studies from the United States Army War College, specializing in strategic planning.

Below is our full conversation with Brig. Gen. Patrick R. Michaelis. This podcast can also be found on Apple and Spotify. Search Who’sOnTheMove SC.