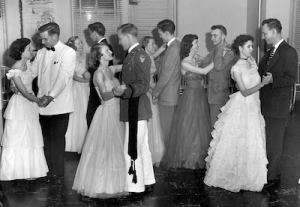 For more than 70 years, the only males at Lander College, the forerunner of Lander University, were visitors or members of the faculty or staff.

That changed in 1944 when Oliver L. Thomas, of Ninety Six, enrolled as a day student. Thomas attended Lander for two full terms and two summer terms before entering the Medical College of South Carolina in 1945.

After his medical school graduation in 1949, Thomas returned to his hometown to practice medicine until his retirement in 1985. A member of the original medical staff at Self Memorial Hospital, he served as mayor of Ninety Six for four terms. Lander University presented Thomas with its Alumni Distinguished Achievement Award in 1994.

Thomas’ enrollment at Lander – groundbreaking at the time — coincided with the end of World War II, a period which brought a new era of coeducation to Lander.

An Aug. 10, 1946, article in The Index-Journal in Greenwood reported that Lander was offering veterans the opportunity to continue their college studies which had been interrupeted by the war. According to the newspaper, “Four ex-servicemen and two WACS (Women’s Army Corps) have already been enrolled at Lander College, one of three women’s colleges in the state which have opened their doors to returned veterans seeking to get into college this fall.”

Dr. John M. Rast, then Lander President, said that Lander would do all it could “to alleviate the situation in which veterans back from the war will find themselves unable to continue with their study due to the abnormal conditions in which most colleges are already turning away applicants for the coming year.”

Three years later, coeducation was the norm. An Index-Journal editorial on June 10, 1949, touted, “Parents of both young men and young women in Greenwood and adjacent counties have a great opportunity to obtain college education for their children at Lander and at a great saving in cost at Lander College. The quality of the college training at Lander is equal to any college of liberal arts in the State and the cost for those who live in our area is much believe the cost in similar colleges some distance away.”