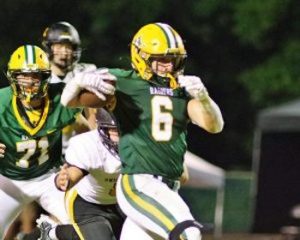 The Laurens County Touchdown Club is proud to announce that for games played on October 7th, the Player of the week is senior linebacker, running back and special team player Jordan Roberts of Laurens District High School.

Roberts is linebacker, running back and special teams player for the Laurens District High School Raiders as they lost a hard fought game to Riverside 17 – 14 Friday night.

Jordan Roberts, a Laurens District High senior, had seven tackles from his linebacker position and well as 5 assists.  Roberts also had one tackle for loss, 2 hurries and 2 pass break ups.
Offensively, Roberts had 6 carries for 18 years and threw one pass good for 8 yards.

Laurens District High School Head Coach Daryl Smith stated, “Jordan Roberts is a great football player and a great leader.  He is an unselfish player that will do anything to help his football team.  He is an excellent tackler, he long snaps for us, and has shown good vision at running back the last few weeks making some explosive plays.”