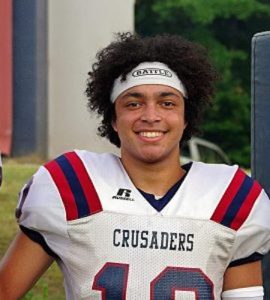 The Laurens County Touchdown Club announced that for games played on October 21st, the Player of the Week is senior running back and special teams player Clarence Bertoli of Laurens Academy.

Bertoli scored 7 touchdowns total; 5 touchdowns through the air and rushing for 2 touchdowns on the night for the Crusaders.  He had 9 catches for 226 yards and 5 TDs, as well as 5 rushes for 78 yards and 2 TDs. Bertoli also had 3 solo tackles and kicked the ball well all night with one touchback.

Laurens Academy Head Coach Travis Plowden stated, “Clarence was phenomenal in a rivalry game with a playoff birth at stake.  He was by far the most dominant player of the night.  He ran the ball tough all night and when our defense struggled he had an immediate answer for each score they had.”