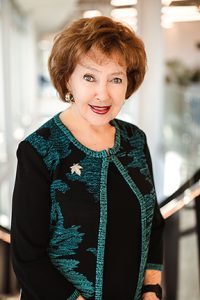 Trident Technical College President Mary Thornley received the state’s highest civilian honor, the Order of the Palmetto, from Gov. Henry McMaster Nov. 19 during a virtual Trident Technical College Foundation board meeting. Foundation staff members presented the award to Thornley as a video of the governor’s remarks was shown during the online meeting. The Order of the Palmetto is awarded to citizens of South Carolina for extraordinary lifetime service and achievements of national or statewide significance. Gov. John C. West presented the first Order of the Palmetto in 1971.

Thornley has worked at the college for 47 years. She was hired as an adjunct instructor in 1973 and became a full-time instructor the next year. Over time she moved up the ranks and held positions including department head, dean and vice president for academic affairs. She was named president in 1991.

During her tenure, the college has more than doubled in physical size, and the college’s enrollment has grown to almost 12,000 students, making Trident Tech the third largest college in the state.

Thornley has played a pivotal role in expanding the role of the technical college system in South Carolina beyond education, to include playing a valuable role in attracting economic development. Whether retraining those displaced by the Navy base closure or working with readySC and Apprenticeship Carolina to ensure that new employers have a trained workforce as they stand up operations, Thornley has been at the forefront. With the departure of Johnson & Wales University, she worked with industry leaders to develop the Culinary Institute of Charleston to build a workforce to meet the demands of the state’s hospitality industry. Partnering with the region’s county leaders, she secured funding for the college’s Nursing and Science Building to address the growing nurse shortage.

With the entry of major aeronautics and automotive manufacturers into the region, such as Boeing, Mercedes and Volvo, a large, reliable source of employees with advanced manufacturing skills was needed. She campaigned for the S.C. Aeronautical Training Center, which opened on the college’s North Charleston campus in 2019. She worked with the Commerce Department and readySC to develop a regional training center and developed a lean manufacturing certificate program to enable more state residents to meet employers’ manufacturing experience requirement. She was also an early advocate of partnering with secondary schools on programs such as early college, dual credit and the nationally acclaimed youth apprenticeship program.

Thornley has made equity in enrollment, program completion, campus environment and employment and promotion a hallmark of her 29-year tenure as president. Her commitment to equity has been recognized with 2016, 2017 and 2019 S.C. Association of Technical College Commissioners equity awards, the 2017 Association of Community College Trustees Southern Region Equity Award, and the 2017 Association of Community College Trustees Charles Kennedy National Equity Award. She has received numerous other awards including the South Carolina Association of Technical College Commissioners CEO Award, the Septima P. Clark Charleston Branch NAACP Education Award and Joseph P. Riley Leadership Award.

In 2018 the college’s main campus in North Charleston became the Thornley Campus after the college’s Area Commission voted to rename the campus to honor Thornley’s long tenure as president and recognize her outstanding leadership at the college and in the community. Trident Tech has three other campuses in the region: Palmer Campus in downtown Charleston, Berkeley Campus in Moncks Corner, and Mount Pleasant Campus in Mount Pleasant. The college will open a fifth campus, the Dorchester Campus, in Summerville in 2021. The college also provides services at two sites, one in Hollywood and the other in St. George.