Projects by City of Cayce and MORE Justice will help create a more informed and engaged Columbia, South Carolina community.

The John S. and James L. Knight Foundation, a longtime philanthropic partner to the Columbia community, has awarded $113,000 to two local nonprofit organizations. The projects — which include the creation of a new arts district in Cayce and a trust fund focused on affordable housing — will help strengthen resident engagement across the Columbia region and make it a more vibrant place to live, work and play. 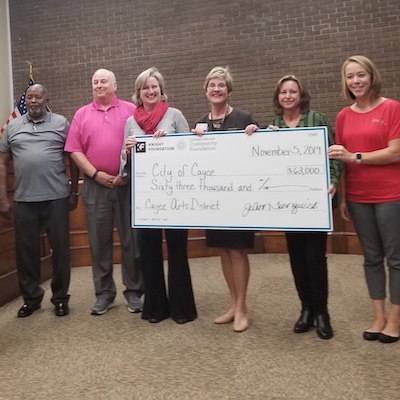 The Midlands’ nonprofits and their projects include the following:

“The John S. and James L. Knight Foundation is a national foundation with deep local roots in Columbia,” says JoAnn Turnquist, president & CEO of Central Carolina Community Foundation. “We are thankful for Knight’s investment and ongoing support of our community.”

Knight Foundation has invested more than $841 million in community initiatives since its creation in 1950.

Knight invests in the success of 26 cities where brothers John S. and James L. Knight once published newspapers, including Columbia. Since their funds were established at Central Carolina Community Foundation in 1993, Knight has invested over $2 million in the Columbia area, helping to drive economic success. Knight Foundation’s work across the nation helps cities attract and retain talented people, expand economic opportunity, and create a culture of civic engagement. Knight Foundation believes that successful communities are equitable, inclusive, and participatory.

Central Carolina Community Foundation, the Midlands’ center for philanthropy, is a nonprofit organization serving 11 counties in the Midlands by distributing grants and scholarships and linking the resources of donors, nonprofits and area leaders to communities in need. Major initiatives include the online giving challenge Midlands Gives, On the Table, Connected Communities grants, the One SC Fund, the Best of Philanthropy Awards, and annual scholarships. For more information about the Foundation, visit www.yourfoundation.org or call 803.254.5601