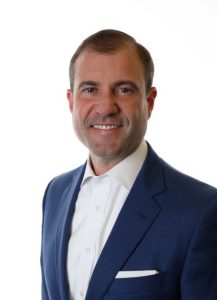 United Community Bank is bolstering its executive leadership team by adding banking veteran Abraham Cox as Chief Marketing Officer. In this role, Cox will be responsible for amplifying the company’s compelling brand promise through effective digital marketing, branding, advertising, and communications. He will lead the bank’s marketing and communication strategies supporting the company’s strategic goals, accelerating United Community Bank’s efforts across all channels to serve and meet the needs of its bankers, customers, and communities.

Cox will report directly to United Community Bank Chairman and Chief Executive Officer Lynn Harton and will serve on the bank’s executive team.

“Abraham’s impressive banking experience and different leadership roles make him a great fit for our United Community Bank team. With more than 20 years of experience across many aspects of the banking industry, I am confident that he will help us thoughtfully grow and expand our brand across the Southeast,” said Harton. “We are recognized as one of the most trusted banks in the country and we want to continue to reach new customers with our commitment to service.”

Cox joins United Community Bank from Truist Financial Corporation, where he was most recently responsible for Mortgage Originations for the company and successfully navigated the complex integration of two high performing sales organizations since the Merger of Equals of BB&T and SunTrust. He began his banking career in 2000 with BB&T, where over the next two decades, he held leadership roles in markets and regions across the Mid-Atlantic and Southeast.

“I’m thrilled to join United Community Bank, an organization that remains committed to delivering a distinctive banking experience,” said Cox. “The United brand reputation is strong and the potential for an even greater presence in the financial industry is an incredible opportunity. I’m excited to be part of something with such great momentum.”

Cox is a graduate of North Carolina State University and the Graduate School of Banking at LSU. He will be relocating from North Carolina to Greenville, SC to work alongside the other members of United Community Bank’s executive leadership team.

United Community Banks, Inc. (NASDAQGS: UCBI) provides a full range of banking, wealth management and mortgage services for relationship-oriented consumers and business owners. As of September 30, 2022, United had $23.7 billion in assets and 193 offices in Florida, Georgia, North Carolina, South Carolina, and Tennessee, along with a national SBA lending franchise and a national equipment lending subsidiary. The company, known as “The Bank That SERVICE Built,” has been recognized nationally for delivering award-winning service. In 2022, J.D. Power ranked United highest in customer satisfaction with consumer banking in the Southeast, marking eight out of the last nine years United earned the coveted award. Forbes recognized United as one of the top ten World’s Best Banks in 2022. Forbes also included United on its 2022 list of the 100 Best Banks in America for the ninth consecutive year. United also received ten Greenwich Excellence Awards in 2021 for excellence in Small Business Banking and Middle Market Banking, including national awards for Overall Satisfaction and Likelihood to Recommend. United was also named one of the “Best Banks to Work For” by American Banker in 2022 for the sixth consecutive year based on employee satisfaction. Additional information about United can be found at www.ucbi.com.