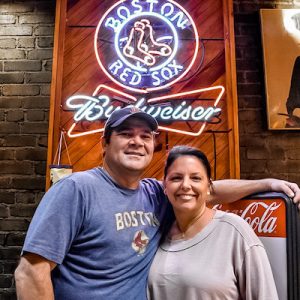 Village Idiot Pizza is celebrating 30 years of serving NY-style pizza and good times in a comfortable, laid-back atmosphere. Under Kelly and Brian Glynn’s ownership, the Columbia classic has reached a major milestone that few local restaurants have achieved.

The original Village Idiot Pizza location has become a fixture in Five Points, Columbia’s original village neighborhood. The first location opened in 1990, launched by three friends from New Jersey who lovingly referred to themselves as “the village idiots” in the neighborhood. The name stuck, and now the jester imagery is one of the most recognizable in the area.

Since its inception, Village Idiot has been fueling the downtown Five Points area with pies and pitchers. Yet the Five Points location did look a little different in the ‘90s — then dubbed “the Idiot” by its patrons, there were classic elements like vinyl records to set the soundtrack plus unique games ranging from hermit crab races to a prize wheel behind the bar.

Current owners Kelly and Brian Glynn were both working in the restaurant in 1994 — Kelly as a server and Brian as a cook. The restaurant changed ownership in 1996 until it was taken over by the Glynns in 2003.

After meeting at the restaurant in 1994, Kelly and Brian’s playful work dynamic transitioned into a relationship and then marriage with Village Idiot almost always playing a large role in their life together.

“Somehow I knew we would become owners,” says Kelly Glynn. “I felt that ownership in my heart since working at Village Idiot as a young adult. When the opportunity arose, we had to jump on it — it was meant to be.”

The Glynns have both been in and out of the restaurant industry since their teens. Armed with grit and passion, they jumped in headfirst and continue to be highly involved in day-to-day operations. The duo kept the same laid-back vibe for which the restaurant is known and loved while also enhancing operations and expanding the eatery into the fun-loving neighborhood spot it is today. Village Idiot boasts 25 category wins as “best” or “runner up” in Free Times’ Best of Columbia over the years, including Best Pizza, Best Happy Hour and Best Trivia.

In 2009, an opportunity to open a Village Idiot location on Forest Drive presented itself, and while the Glynns weren’t anticipating an expansion, the timing was just right. By then, Village Idiot had established itself as a go-to spot in Five Points, but this new location brought the pizzeria to a new audience — families.

Again in 2015 when the opportunity to expand emerged, Kelly and Brian dove in with a new location adjacent to the new Olympia Mills apartment complex on Whaley Street. This location, within walking distance to UofSC baseball and many residential and commercial spaces, brought the restaurant a new set of regulars.

Each Village Idiot location melds with the surrounding neighborhood to create a welcoming and comfortable atmosphere that suits its fans. The Forest Drive location has a family-first environment while Olympia caters to a large happy hour, lunch and to-go business, and Five Points has a thriving base of sports fans with a historic, downtown location for students and out-of-town visitors. At each location, guests can count on its hand-tossed, NY-style pies.

With three locations across Columbia and two consecutive years named “Best Pizza” in Free Times’ Best of Columbia readers’ poll (2019 and 2020), Village Idiot — now referred to as simply “Village” by patrons — is cemented as a local favorite for hand-tossed pizza and making memories. Though the restaurant name’s origin alluded to a feeling of being “outsiders,” Village Idiot is now fully integrated in Columbia culture and is the place that makes customers, old and new, feel like they’re at home.

“We’ve been told by a customer that this was their ‘adult treehouse’ — a reliable hideout with positive energy,” says owner, Brian Glynn. “For me, it’s like a time capsule. It’s so familiar to people, and I think that’s why they keep coming back. It’s exactly how they remember it from college.”

The special sauce to achieving this 30-year milestone — Kelly and Brian themselves. Guests will often see the Glynns actively working and managing Village Idiot. During busy nights, such as when UofSC made it to the Final Four or when the Red Sox won the World Series, Brian Glynn can be found celebrating alongside his ecstatic guests. Despite having twin 3-year-olds, the couple always make time for their first baby, Village Idiot.

As active members of the community, the Glynns have served on many nonprofit boards and committees over the years, including Five Points Association, Five Points Foundation, City of Columbia, Hospitality Tax Committee, Columbia Food and Wine, and St. Pat’s in Five Points. On top of that, they have successfully implemented Pizza for Preemies, an in-house philanthropic campaign to support March of Dimes that runs each November.

The Glynns are invested in Columbia, their restaurants and their patrons. Their involvement in the business is tangible in the quality of their product and the personalized experience customers have come to know.

A hub for sports fans

With owner Brian Glynn’s upbringing in Clifton Park, New York, and passion for sports of all kinds, Village Idiot has turned into a hub for sports fans, especially the Boston Red Sox.

Over the years, Village Idiot has had its fair share of celebrity appearances — from the notorious Michael Phelps’ visit in 2008 (that made it to TMZ!) to other sports stars like Duce Staley, Todd Gurley and Plaxico Burress as well as national television personalities like Matt Barrie and Craig Melvin to appearances from the cast of Southern Charm.

Rooted in tradition and community with a splash of spirited energy, Village Idiot is often the location UofSC alumni return to, where new students bring their parents and youth soccer teams come to celebrate post-win. It’s also where news crews gather to get the community reaction to big sports wins. Whatever the reason to return to Village Idiot, it will continue to welcome you with a warm NY-style pie, just as it has since 1990.

Village Idiot Pizza is an independently owned restaurant and pub in Columbia, S.C., with three locations and a rich history of serving up hand-tossed New York-style pizza, wings, beer and other Italian-American delights to college students, sports enthusiasts, pizza lovers, locals and visitors and more for three decades. A fixture in the Five Points district, the original pizza establishment, “the Idiot,” is one of the longest-standing businesses in the area and has had a measurable impact on the Five Points district since 1990. With the additions of locations in Forest Acres and Olympia over the last 10 years, the restaurant, which offers dine-in, pick-up or delivery service with online ordering, has broadened its reach to provide the high-quality, handcrafted menu items for which it is known and respected. Owners Kelly and Brian Glynn actively engage with community events and volunteer their efforts to help build Columbia’s nonprofit culture and restaurant scene. Learn more and order online at http://www.villageidiotpizza.com.