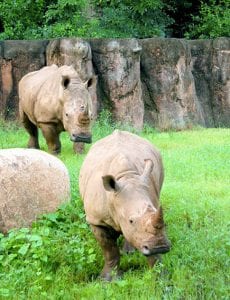 Eight-year-old Kande and two-year-old Winnifred began exploring Riverbanks’ rhino yard for the first time this week after first getting to know one another and settling in to their off-exhibit habitat. Kande from Jacksonville Zoo and Winnifred from Tampa’s Busch Gardens arrived at the Zoo in late June.

“Learning a new environment is a delicate process for animals as well as their zookeepers, and we always move at the animal’s pace,” said John Davis, director of animal care and welfare at Riverbanks Zoo and Garden. “For the next several days, our visitors might occasionally see Kande and Winnifred on the rhino yard for brief periods until the two have fully acclimated to their new surroundings.”

The species was last seen at Riverbanks in 1989. The International Rhino Foundation (IRF) estimates about 18,000 individuals remain in the wild most of which are found in the grasslands of southern Africa. The main threat to the animals is illegal hunting because of the high demand for rhino horn for commercial and medicinal use. Northern white rhinos are now extinct in the wild because of poaching.

Kande and Winnifred will soon be united with Bill—a 15-year-old male from Seneca Park Zoo in Rochester, New York. The three will form a family group following Bill’s expected arrival this fall. The move is part of the Association of Zoos and Aquariums’ (AZA) Southern White Rhinoceros Species Survival Plan ® (SSP). Riverbanks participates in more than 70 SSP programs to help secure a future for threatened and endangered wildlife.

White rhinos are the most social of the five species of rhinoceros and the second largest land mammal behind the elephant. The animals can weigh up to 6,000 lbs. and reach 6 ft. tall but despite their massive size, can run upwards of 30 miles per hour. White rhinos are herbivores that use their square upper lip for grazing on grasses.

The Zoo’s all-new rhino habitat is made possible in part by generous gifts from the Norman and Gerry Sue Arnold Foundation, Thomas E. “Tree” Smith estate, and Riverbanks Society.