As I write it’s 38 degrees and rain is falling. We always seem to be just a few degrees away from snow. This winter a light snow would be nice. Being home with hot chocolate, soup, and coffee makes a snowy day a beautifully peaceful day. But what if you lived alone in a cabin in 12-foot snow and your nearest neighbor was 60 miles away? What if the power you rely on is bottled gas. No electricity. Just firewood. I traded letters with a writer who faced that situation each winter. He lived alone in the remote reaches of Alaska, the Land of the Midnight Sun. 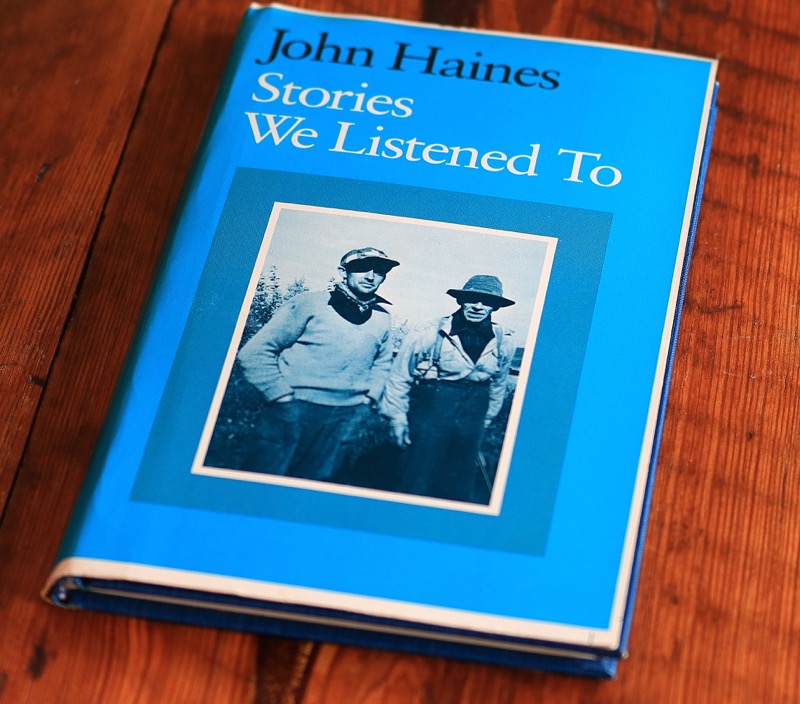 His letters described a beautifully harsh landscape where solitude is yours whether you want it or not and each day is briefer and darker until, finally, darkness swallows you.

This man’s companion through the long Alaskan winter was a crackling fire. His forays into the snowy wilderness meant encounters with grizzly bears and one day he had no choice but to shoot one in the chest. The bear clambered up a hill. For a long time, he feared an attack from this wounded bear.

The Alaskan writer was John Haines. His wintry wilderness story began in 1947 when he and a friend drove to Alaska where he bought a 160-acre homestead, 80 miles southeast of Fairbanks. His goal was to paint the Alaskan winters. He salvaged wood from an old bridge and built a 12-by-16-foot cabin. When his paint froze, he turned to writing instead.

Haines long lived in extreme winters in that land of cold rivers, salmon, volcanoes, and glaciers. He tracked animals for food with frostbite always a subtle threat. One night a man knocked on his door. Frost covered his hair. He couldn’t lift his head or unclasp his arms. “His feet and lower legs were like dead things, nearly hard and white as marble,” wrote Haines. Warm coal oil, massaged into the man’s legs, saved them. “He may have lost a couple of toes, but he walked on those feet and legs till the day he died.”

Ice ruled supreme, making everything beautiful, making everything deadly. Haines described how a nearby river would freeze as winter laid its hand upon the land. “Free of its summer load of silt, the river,” he wrote, “was incredibly blue and big rafts of ice crowd each other. Where it gathers speed in the rapids above, the sound of all this ice and water is loud, rough, and vaguely menacing. As the cold gradually deepens and the sunlight departs in the days to come, the floating ice will become harder and thicker, and the sound of its movement in the water will change to a harsher, grinding and crushing … The ice sings, groans, howls and whistles like a living thing.” The freezing river cut off an avenue for escape. No way out in a dark, cold land where no one can save you should something dire transpire.

Years ago I made a treacherous drive back from West Virginia in a snowstorm. What should have been an eight-hour drive took eighteen hours. Intestate 77 was nowhere complete and I had to take a backroads highway in Virginia to Mount Airy, North Carolina. Every time I tried to stop to get coffee the car began to slide. Drove all night through falling snow. I’d see yellow lights in valleys far below. “If I end up sliding down a mountain,” I thought, “I can make it to someone’s house.”

Sometime after midnight I drove up behind a snowplow. Stayed behind it for hours. Finally, the snowplow pulled off the road. I began the seven-mile descent from Virginia on Highway 52 that leads to Mount Airy. At long last, I left the mountains and snow behind, got some coffee and gas, and let my dog get a much-needed break. That’s as close as I’ve come to being stranded in snow.

This winter should we see flakes as big as quarters tumbling from the sky, let’s appreciate winter’s beauty and think of intrepid souls in the Land of the Midnight Sun. Who knows what they face as we enjoy a winter day destined to give way to sunshine and temperatures in the 50s.

Marvel at the rare beauty of a Southern snow, should we get one. Venture out with no fears of grizzlies, frostbite, or getting lost in a blizzard. Go into snowy woods and study animal tracks, and be glad you don’t have to track them down to survive. They’ll be glad too.