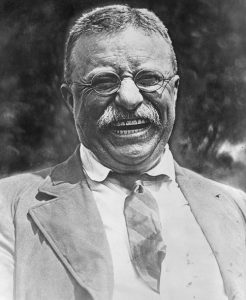 Before he was president, before he even charged up San Juan Hill, Teddy Roosevelt co-wrote a book about American heroes.

Joe Long, curator of education at the South Carolina Confederate Relic Room and Military Museum, has always loved the book, and has decided to share that enjoyment with the public.

Starting Sept. 3 at 9 a.m., he will deliver short – about 15 each – lectures via Zoom focusing on one chapter at a time of “Hero Tales From American History,” which Roosevelt wrote with Henry Cabot Lodge in 1891. Joe’s series of mini-lectures is called “Heroes on Zoom.”

The book features 26 different stories, each only five or six pages, that run chronologically through American history up to that time. It starts with George Washington and ends with Abraham Lincoln. In between, it covers such topics as the Revolution, Daniel Boone, the War of 1812 and the Alamo. There are a “goodly number of battles,” Joe says, but also stories about President John Quincy Adams and artist Francis Parkman.

Roosevelt intended the book to be educational, teaching schoolchildren as well as new immigrants “what it meant to be an American based on ideals and shared history.” As such, it provides a glimpse into how men who are now prominent historical figures themselves viewed the American story and how to impart it.

Joe, who conducts the museum’s Home School Friday programs, also hopes it will be educational – to adults as well as the young. He thinks brevity will help make the programs welcome and accessible to those who would turn away from a lecture lasting “45 minutes to an hour.”

The book even has a physical connection to the museum itself. As president in 1905, Roosevelt gave a number of flags captured by the Union during the Civil War to the Relic Room. One, the striking blue battle flag of the 1st South Carolina Rifle Regiment, which is on display in the museum’s main gallery, is featured in one of the stories from the book.

Grab a cup of coffee and tune in via Zoom starting at 9 a.m. on Thursday, Sept. 3! Details for connecting can be found on our Facebook page. Joe will be expecting you.