Smith Chapel found me Sunday. Though it’s on Smith Chapel Road and sounds like a no brainer, directions for my first attempt led me astray. That day I turned left when I should have turned right. This time fine gravestones on my left told me I was in the right place.

At first I failed to see the church in pines for it’s camouflaged. Pine straw tan, faux asphalt brick covers it. Through pines and cedars the aged black church materializes. That old shingle-like fake brick siding became popular in the 1930s so my guess is the 1911 building got modern, for a while. Now it’s making its last stand where cotton fields overlooked a free-running Savannah River. Floating cotton bales down river to Augusta took place somewhere down the steep hillside east of the chapel/school. Thus did the children of slaves come to know this church. 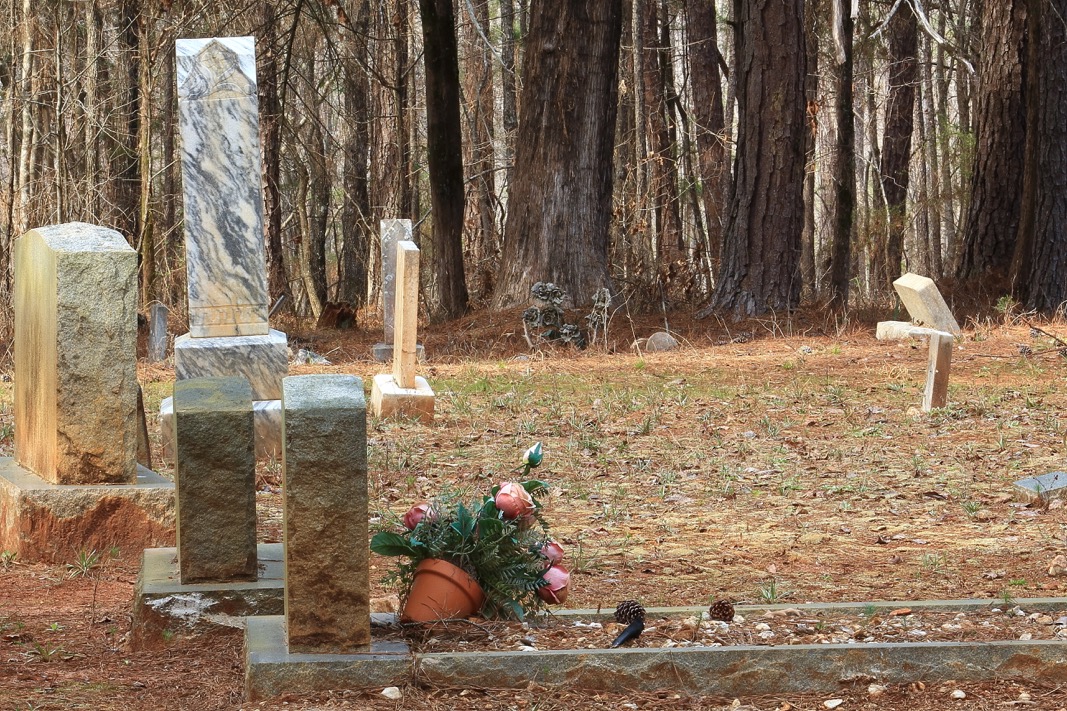 Now I’ve seen more than a few homemade cement tombstones with nail-scratched sentiment in them. Not so at Smith Chapel. The stones here are regal and there’s a reason for that. Two former slaves in Arkansas founded a fraternal organization, the Mosaic Templars of America, which originally provided members illness, death, and burial insurance when such things were unavailable to blacks. The Templars also provided a Vermont marble marker. On Webster Murray’s stone you’ll see the Templar’s insignia. At its base you’ll see the name C.E. Bush. Chester E. Bush was the son of one of the Arkansas founders. 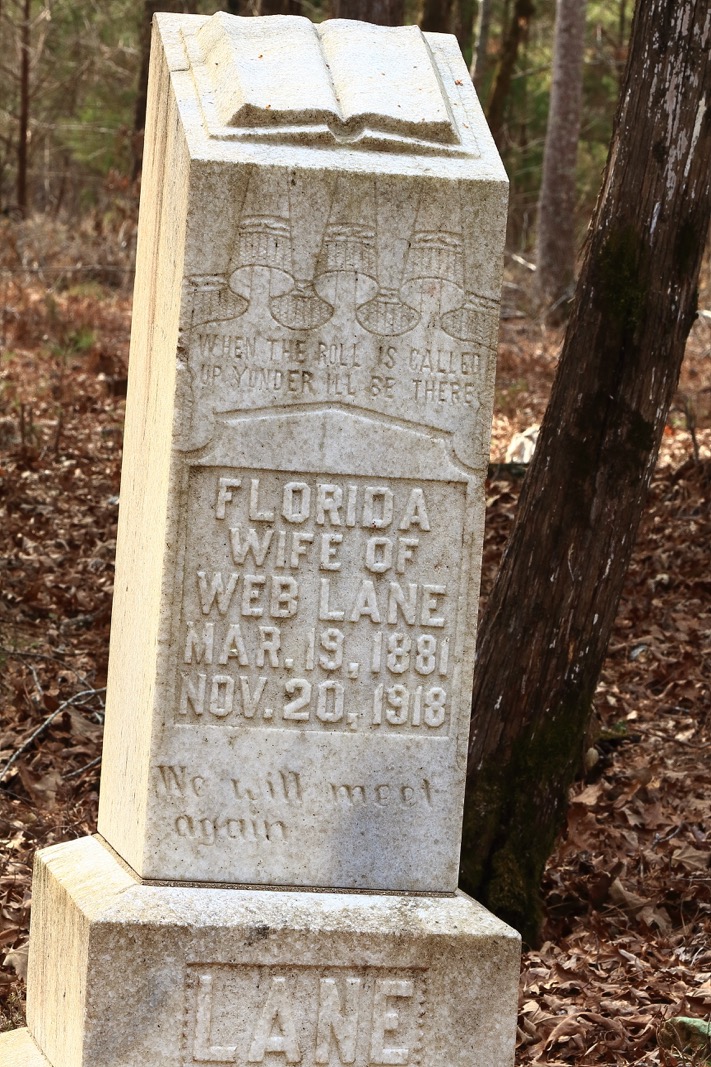 I grew up in Lincoln County studying US and Georgia history but local history didn’t get much attention. No one ever mentioned this historic black church that also served as a school. I found some information on it in a website, Historic Rural Churches of Georgia.

“The little structure, located deep in the pine forests of Lincoln County, that you see here looks like an abandoned relic of the past that will not be with us much longer. But it has significant historical importance that is worthy of some discussion. This little one-room building was once a church and a school in the early 20th century. We have tried to find some information about it but the only thing we found were the following three lines in a Lincoln County History book: ‘Smith Chapel School, known as “Sweet Easy,” was once an active school for the black community.’ The sign over the door shows a ‘going-to-church’ scene on the left and a ‘classroom’ scene on the right. It has fallen into disuse and disrepair today.” 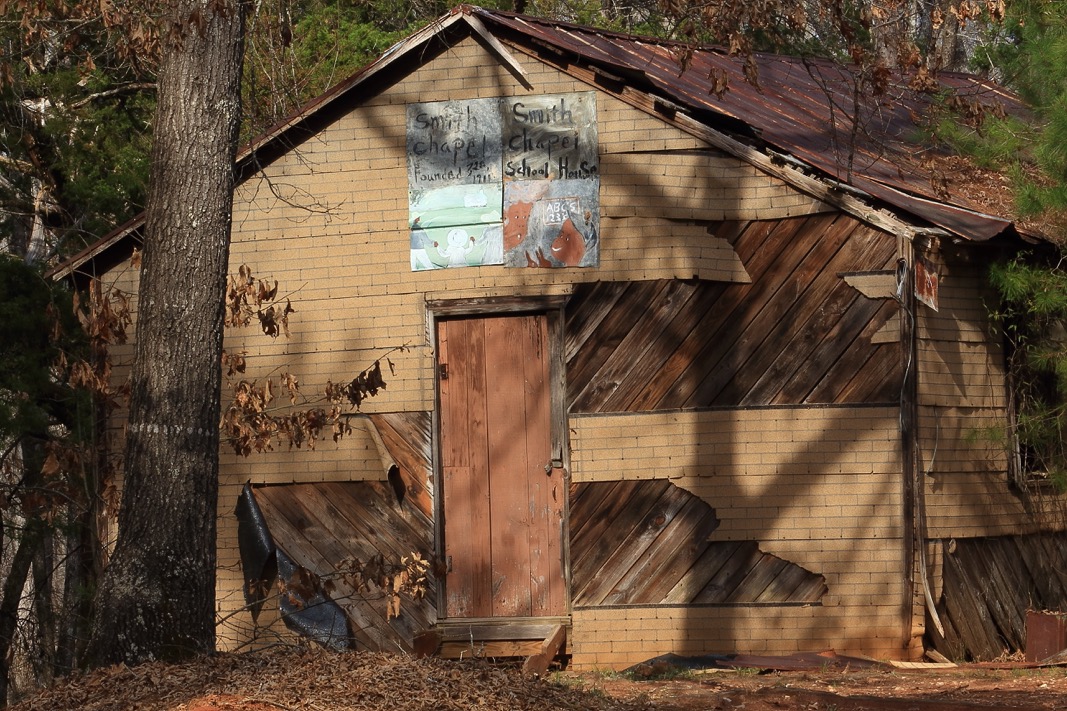 Disrepair is right. As I pulled back some screen wire on the rear window a flapping of wings commenced and a buzzard flew out a side window. It’s March. My best bet is she has a nest in the building. Across the cemetery, monuments leaned and several had toppled over. Old churches and their collapsing cemeteries drive home something fundamental. We are sojourners just passing through. I’ll not get into the hereafter and everlasting life. That’s for sermons and men of the cloth, but venture onto the grounds of an abandoned church and you’ll often get a lonely feeling like you won’t exist much longer.

I didn’t feel lonely at Smith Chapel. Felt peaceful as I walked through the cemetery and noted recent burials but what struck me were the names. Beautiful names like Florida, Dellar, and Simion. I saw too surnames such as Williams, Lane, and Cunningham. 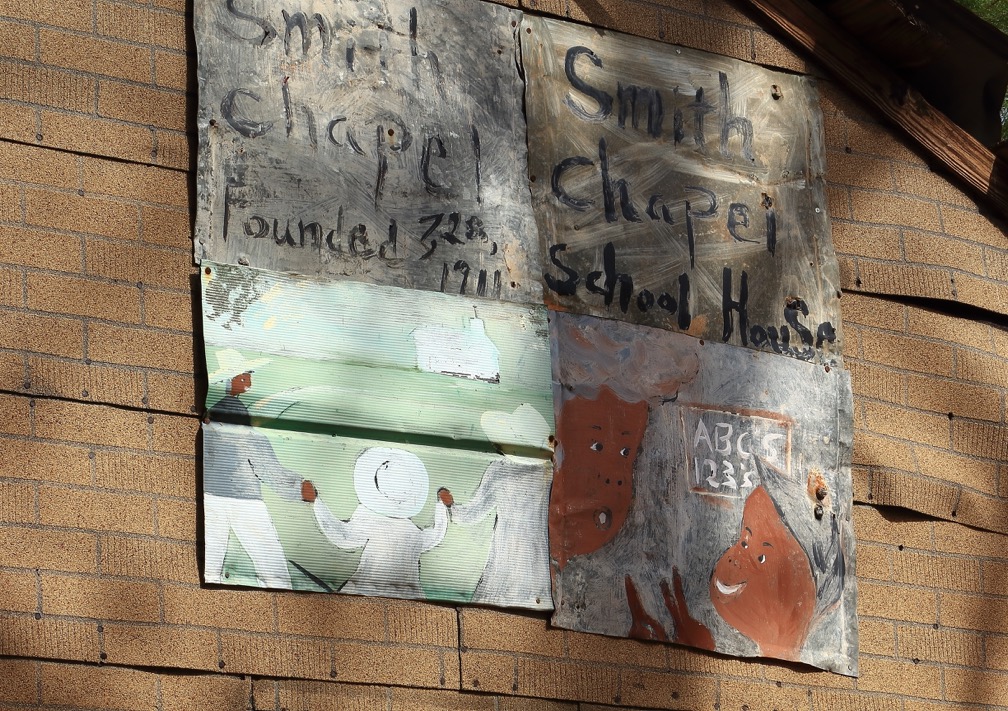 I looked at the sign over the chapel door. I’d wager Leonard Jones did the artwork. Certainly it’s his style. And then one last thing grabbed me. I’ve been writing a story of floral accents and themes that needs real silver flowers and leaves. They’re rare in nature but Artemisia, dusty miller, honeywort, and cotton lavender give us silver blooms and/or leaves. In Smith Chapel’s cemetery I spied my first ever cluster of silver flowers, fake, of course, but I took it as a sign my work was on course.

I left Smith Chapel knowing I’ll return. For best of all I like the lovely headstones like Florida’s which leans like the Tower of Pisa. Florida died in 1918 at the age of 37. Might she have succumbed to the Spanish flu pandemic? Yes her stone leans but it has an open Bible of marble atop it. I’d like to place a red rose in her Bible of white marble and shoot it in black and white … maybe give it a silver tint. Commemoration, inspiration, and recollection all in one fell swoop.