What made me think taking 69 fifth graders on a field trip to New York City in a pandemic by myself was a good idea? Turns out, it was fine.  Great actually. Nobody got homesick or got lost. Nobody bickered.  Nobody got a nosebleed or threw up. I’ve gone on hundreds of field trips but never one like this.

We made a quick stop in Times Square.  The kids all wanted to see the home of Hamilton, the Musical.

Next stop?  Pier 96 for a mini-lesson on one of our favorite explorers, Henry Hudson. We walked around the corner to Columbus Circle to continue our review on the Age of Exploration.  Some of the students had forgotten the names of Columbus’s three ships but seeing them on the statue brought it all back.

We couldn’t go inside the Metropolitan Museum of Art because of Covid-19, but as we stood on Fifth Avenue talking about “Washington Crossing the Delaware,” a group of students from Marymount School of New York rounded the corner, coming back from their own field trip, the old-fashioned kind.

The American Museum of Natural History became our classroom after lunch as we travelled through the Hall of Human Origins and the Hall of Fossils.  It’s one thing to read about our earliest ancestors following herds of wooly mammoths across the Bering Strait in a textbook.  It’s another to stand beside one of those giant beasts with your students. 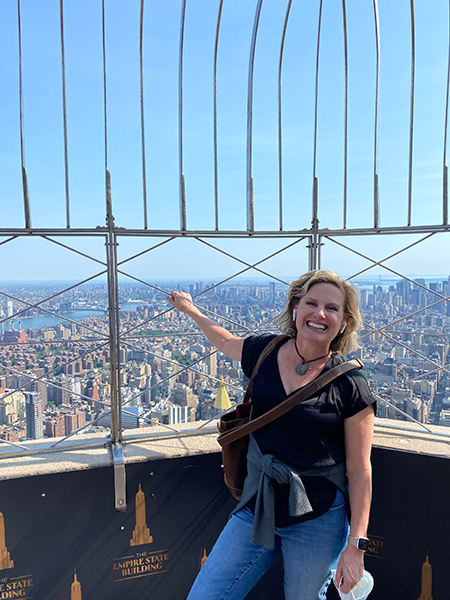 That afternoon, the extended day kids rode the elevator with me as we went up and up and up some more to the top of the Empire State Building.  I’m not big on heights so it helped to the count the floors together, 84, 85, 86 and then 100, 101, 102.  No lines, no waiting, we practically had the observation deck to ourselves.  Lots of oohing and aahing as I told about competition between General Motors and Chrysler.  Best geography review ever as the students successfully named the six states that can be seen from that venue.

The next day, we toured Fraunces Tavern Museum with anthropologist and historian Sarah Kneeshaw. Top three student highlights? A lock of George Washington’s hair, a pendant with his tooth encased, and Benjamin Talmadge’s memoir describing the night that Washington said farewell to his officers. The kids knew the definitions of artifacts and primary sources, but this experience was better than any worksheet. It’s one thing to learn what an anthropologist is. It’s another to spend several hours with one.

No teacher will ever forget the 2020-2021 school year, and I know my class will never forget their NYC experience. This was a different kind of field trip because 2020-2021 was a different kind of school year. For this Covid-style adventure, I flew to the Big Apple with a camera person (my daughter).  My students stayed behind and sat behind plexiglass and wore masks and watched history come to life on a Fauci-approved field trip.

Throughout this virtual adventure, I thought about how far I’d come in fourteen months. I never thought I would have anything nice to say about Zoom. At first I thought the only redeeming feature was the “mute all” button.

I hated trying to teach my ten-year-olds without actually being with my ten-year-olds.  I hated feeling clumsy with the technology. The learning curve was sharp until I realized that my students had my back.  I could count on them to tell me to unmute myself or remind me to share my screen or check my chats. They would walk me through step by step if needed, which was often.  The expression about old dogs and new tricks seemed appropriate, but I had 69-excellent teachers.

Once I became somewhat proficient with the technology, I quickly moved on to new questions, “What next?” and  “Why not?”

Zoom quickly became a powerful new tool in my teacher bag of tricks.  I was awarded a grant to show my students many of the spots in New York City tied to our curriculum.  I took 69 students on a field trip for three days for $2500. Not bad. If I can do it, others can, too.

I went to the other side of the building to another group of security guards and ran through the same story.  I was a fifth-grade teacher from Craig’s hometown taking my students on a virtual field trip to The Big Apple. The oldest man in the group said I talked funny. I told him I thought he talked funny, and that he was also rude.   He chuckled and went inside. 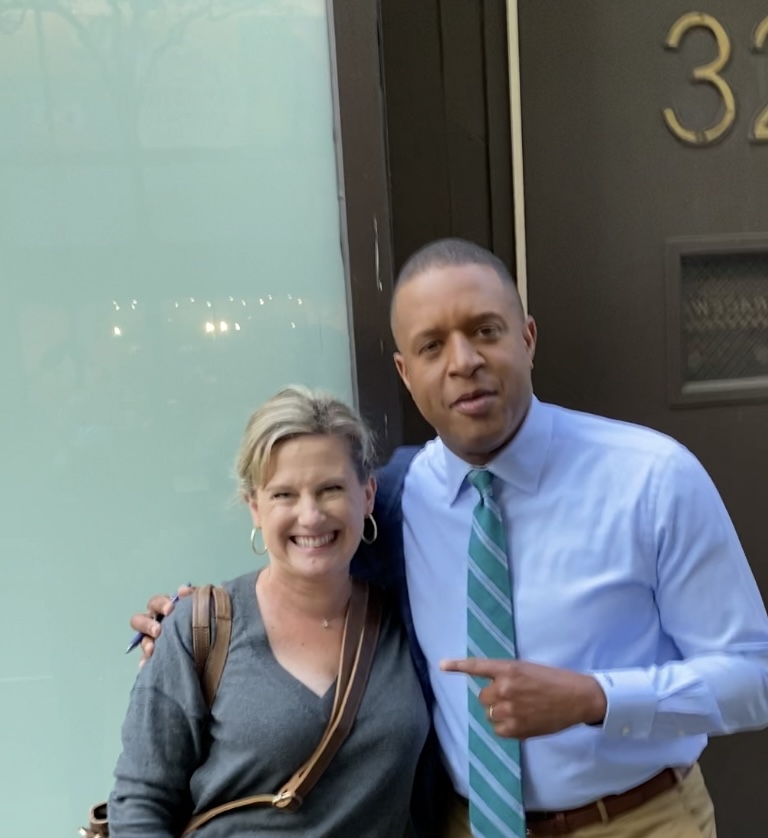 A few minutes later, Craig Melvin walked out onto the sidewalk. The security guard who had laughed at my accent became my camera man.  He took my phone and starting recording as Craig said hello to my 69 fifth graders. The best shout out ever was made even better when he told the kids that history was his favorite subject. I felt terrible that it was too early for my kids to hop on my Zoom, but Craig invited us to come back. He invited us all to come back.

As I waited on our plane to take off, I watched the video of Craig Melvin and me.  I couldn’t wait to show my students.  As I looked out the window of the airplane, I thought about his invitation to come back, and I wondered…should I even think about taking sixty-nine fifth graders on a tour through the NBC studios by myself in a pandemic?  Why not?

The technology that caused me so much stress and anxiety now fills me with the best kind of anticipation.  What will I do next?  Take one hundred people with me to Iceland in July?  Who knows?  Why not? Anything is possible.

Tammy Davis is a teacher and a writer finding lessons in everyday life.  To support local artists like Davis, Venmo @tammydavisstories.  To see videos of Davis in NYC (including the one with Craig Melvin) visit her You Tube channel at Tammy Davis Stories.