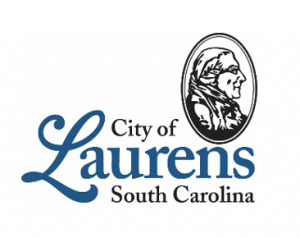 2020 has been a different kind of year in so many ways. But that isn’t stopping the City of Laurens from bringing some much-needed joy to residents. The City of Laurens Christmas Parade is going where no parade has gone before!

“We know that 2020 has been a difficult year for everyone, and sometimes the smallest things can bring the most comfort,” said Mayor Nathan Senn. “We knew that if there was a way to safely hold our Christmas parade, we wanted to be creative and find a way to make sure our citizens had this special part of the Christmas experience.” 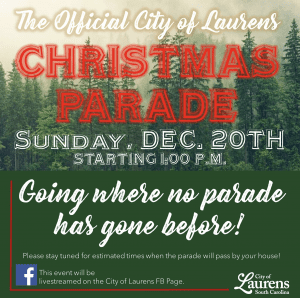 The parade will be shorter this year but will include decorated City vehicles, including the City’s firetrucks and the City trolley. Like any other parade it will include lights, sirens, music, and a neighborhood visit from Santa himself, great help for him to map out his planned route for Christmas Eve

A longer than usual parade route has been designed to go through nearly every neighborhood in the City.  Approximate “neighborhood-by-neighborhood” times will be announced prior to the event.

Here’s a guide to the official parade route:

Spectators may participate by coming out into their own yards or to the streets in their neighborhood along the parade route.  Those unable to view the parade in person or who want to track the progress of the parade as it reaches their area can view the event on Facebook Live through the City of Laurens’ Facebook page.

“By holding this year’s parade in this unique way, we get to have a little fun and do something we wouldn’t do normally, couldn’t do with the size of our normal parade, and likely may not ever do again,” said Mayor Senn.  “Aside from celebrating Christmas with our neighbors, this parade will be one more way we show the world our strength and determination as a community.  This year, it won’t be the number of vehicles in the parade or the size of crowds that we remember.  Instead, we’ll remember that, against all the odds of this tough year, we pulled together to find a way to have a parade and look forward with hope for the new year.”