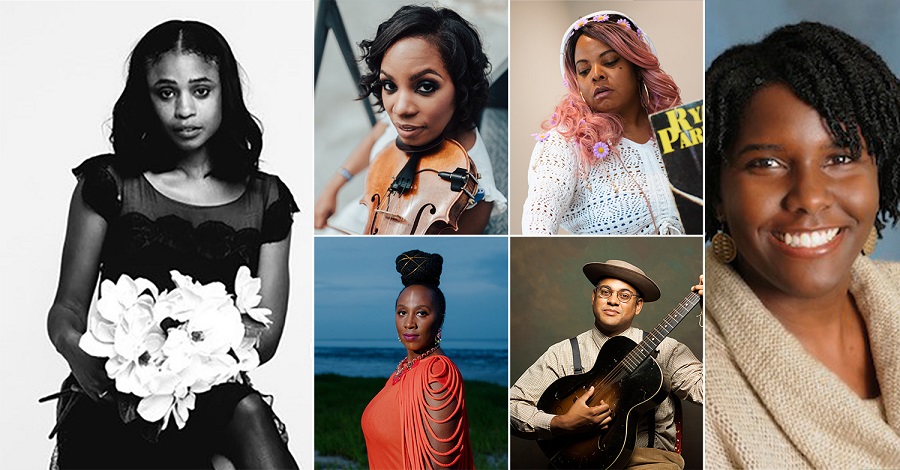 “Last year, we launched More Than Rhythm with the sacred roots of Black music, and this month we will circle back to celebrate Black music’s secular roots in the blues for the season opener,” says Dr. Johnson. “The blues are an amalgamation of folk tunes, Afro-southern mysticism, mother wit, humor, and stories of everyday life — the tragic as well as the sublime.”

In the midst of a world tour and hot off the heels of a dazzling performance at the Newport Folk Festival, Victoria joins Dr. Johnson for the first event of the season to discuss her journey as an eclectic 21st-century blues artist before taking the stage with guitarist Mason Hickman. Their performance includes original poetry paired with dance interpretations by Columbia-based dancer Erin Bailey.

“The blues sits alongside spirituals as a foundational core of African American music,” says Dr. Johnson. “Its roots in Black folk traditions such as work songs, field hollers, chants, street cries, and borrowed folk songs melded in the late 19th century to become a primary voice of Black expressive culture after Emancipation. By the Roaring ’20s, blues artists took the stories and songs of working-class Black life to mainstream and global audiences, upsetting the puritanical sensibilities of the day and inspiring jazz musicians like Duke Ellington and literary figures like Langston Hughes.”

Dr. Johnson continues: “Today the influence of the blues is evident across many genres of American music like soul, rock ‘n’ roll, and hip-hop, but the blues as a genre unto itself never stopped evolving. Artists like Victoria represent the many routes the blues has taken over the past century. In one breath, her music represents a contemporary Southern gothic landscape; in the next breath she’s mining classic feminist texts to weave a song that reverberates with the resistance themes of early blues mothers such Ma Rainey, Bessie Smith, and Ida Cox.”

A native of Spartanburg, S.C., Victoria has traveled the world to find her home in the blues and its poetic ethos to be music for the people by the people. Her music takes audiences through a journey of self-discovery just as seamlessly as she takes on issues of oppression, mental health, and finding one’s voice in today’s world. Her third studio album, A Southern Gothic, co-produced by Victoria and Hickman and executive produced by T Bone Burnett, was released in September 2021 to critical acclaim. Her performance for More Than Rhythm pulls together soulfully haunting vocals, acoustic guitar, and the original poetry that has grounded her as a blues artist and truth teller.

“Our kickoff event in August will celebrate the legacy of the blues by featuring one of its modern voices, Spartanburg native Adia Victoria,” says Dr. Johnson. “A singer-songwriter, poet, and dancer, Adia Victoria stands at the contemporary crossroads of the blues by weaving in southern gothic themes, feminism, and Black literary icons into a fearless sonic tapestry.”

On December 8, More Than Rhythm continues with violinist-arranger-composer-conductor and Columbia, S.C., native Nicole Neely performing with her string quartet, The Black Exchange, in a concert celebrating the impact and influence of Black composers and musicians in American classical music.

The night before, on February 2 during Free First Thursday at the CMA, More Than Rhythm hosts a funk and soul listening party with DJ Lady Marauder spinning vinyl records and Dr. Johnson talking with the community about specific tracks.

Rounding out the Celebration of Soul, More Than Rhythm offers film screenings of Soul to Soul, a 1971 documentary capturing the story of Black American souls (re)connecting with Black West African souls through music, on February 16, and Claudine, a 1974 romantic comedy with a social conscience set to a sunny soul soundtrack, on February 23.

On June 23, More Than Rhythm’s series finale features Dom Flemons — GRAMMY Award winner, two-time EMMY Award nominee, and 2020 United States Artists Fellow — who has branded himself with the moniker “The American Songster” since his repertoire covers over a century of early American popular music.

“In season two of More Than Rhythm, our musical journey through several eras of Black music continues with the sounds of acoustic soul, modern classical, and Black folk musics,” says Dr. Johnson. “Each event will include familiar interactive components like our lively pre-show conversations, film screenings, and cocktails outside the galleries, but we’ve also added workshops and listening party events.”

Dr. Johnson’s most recent publications include a chapter about 21st-century gospel archiving in The Oxford Handbook of Musical Repatriation, a chapter about gospel remixes of Beyoncé songs in Beyoncé in the World: Making Meaning with Queen Bey in Troubled Times, and sacred themes in the music of Outkast in An OutKast Reader: Essays on Race, Gender, and the Postmodern South. She has been quoted or featured in media and news outlets such as Rolling Stone Magazine, NPR, Vox, Public Radio International, and South Carolina ETV.

Presented by the Baker & Baker Foundation. This series has been made possible in part by the National Endowment for the Humanities: Democracy demands wisdom. This series is supported by Richland County Government and a Connected Communities grant from Central Carolina Community Foundation. Celebration of Soul programs are supported by the Friends of African American Art & Culture.