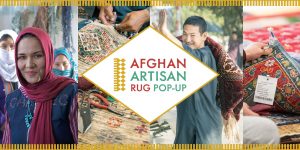 Ten leading Afghan rug producers will be offering their hand-knotted rugs direct to the public in a special pop-up sale in Charleston this week. The Afghan Artisan Rug Pop-up will take place at Fine Rugs of Charleston located at 1523 Meeting Street Road, from June 26 to July 5, showcasing more than 800 top quality, hand-woven rugs which are made from hand-spun wool with natural dyes.

The pop-up event is spearheaded by Rob Leahy, owner, Fine Rugs of Charleston, and also the founder of the Kabul Carpet Export Center (KCEC). Founded in 2014, KCEC was formed after receiving a large award from the United States Agency for International Development (USAID) to help the people of Afghanistan gain a better foothold in the carpet and rug industry.

“KCEC is a jobs creation program that stimulates employment for women and returning refugees,” said Leahy. “Handmade carpets are still a craft and made, mostly by women in their homes. We aim to help the weavers by selling their rugs here and sending the proceeds back to Afghanistan.”

The monies raised from the pop-up event will be used to stimulate the production of new rugs and create jobs that will enable family businesses to grow, helping the Afghan economy become more stable.

Afghanistan remains the world’s leading source of high-quality, hand-knotted rugs as the rug industries in Turkey, China and Iran have been sidelined by global politics and economics. Many of the top-selling rugs in the U.S. are made in Afghanistan but are often mislabeled as coming from other countries owing to the many hands they pass through to get here.

Now, Afghan rug manufacturers are bringing their rugs to Charleston themselves to sell them at direct-to-consumer prices. It is a rare chance for those who purchase rugs to meet those who make them.

Each manufacturer relies on hundreds of weavers who often are part of their own extended families. Most rugs are woven by women in their homes. Rug-making is one of the few ways women have of earning household income. They use knotting techniques that vary from one ethnic group to another but have been handed down from mothers to daughters across generations.

The Afghan Artisan Rug Pop-up will run Monday to Friday from 10 a.m. to 5 p.m., and Saturday and Sunday from 11 a.m. to 3 p.m. on Sunday. Entry is free. For those wanting home delivery of rugs they purchase, a service will be available for a fee.

For more information go to AfghanRugPopUp.com