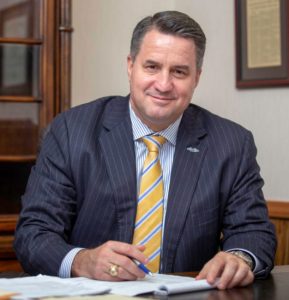 CHARLESTON, S.C. – Col. William Mellard “Bill” Connor V, an Orangeburg attorney and formerly deployed U.S. Army Infantry officer (currently serving in the Army Reserve), has thrown his hat in the ring in a quest to be elected to The Citadel’s Board of Visitors. He is the first formally announced candidate for a seat on the prestigious Board which is responsible for directing and supervising the historic South Carolina military college, Connor’s alma mater.

“This would not only be a personal honor, but a special opportunity for me to serve the school which so-positively influenced me during those formative years of my military education and training,” said Connor, speaking on the phone from his Orangeburg law firm earlier this week. “My goal as a member of the Board of Visitors would be to aid and support the president, the commandant, the Corps of Cadets, and the alumni; protect the traditions of The Citadel; embrace reasonable and necessary change; save money; and serve as a voice of encouragement and balance as we navigate our way forward into the 21st century.”

A decorated veteran of the war in Afghanistan, Connor contends that much of what he has learned – and was infused into him – about selflessness, service to others, and sacrifice were the very same virtues he now sees “bearing fruit,” he says, in the experiences of his son, a first year Cadet at the 178-year old college.

According to an article in the Charleston Post & Courier (Jan. 18, 2020), “Connor said he likes the heighten emphasis on academics for first-year students, like his son, who can go through rigorous military-style rites of passage as ‘knobs.’ (Connor said he lost 40 pounds and a lot of sleep as a knob in 1986.)”

He added, “Cadets, like my son, have the right to expect their rightful inheritance from The Citadel. The Citadel heritage is both the experience within the culture and the ‘brand’ of The Citadel.”

In addition to his law practice, Connor serves or has served on numerous boards and advisory councils. He currently serves as chairman of the National Security Task Force, one of 10 mission-specific task forces (subcommittees) which compose the gubernatorially established South Carolina Floodwater Commission.

“Bill is one of those rare combinations of both right-brained creativity and left-brained analysis and meticulous attention to detail,” said Tom Mullikin, chairman of the S.C. Floodwater Commission. “When we couple those things with Bill’s military experience, we see this remarkable leadership model which has served us so well in his chairmanship of the National Security Task Force.”

As a career Army officer, Connor is a former light infantry commander and Ranger training company commander who, among other posts, later served as the senior U.S. military adviser in Helmand Province, Afghanistan. He currently serves as the emergency preparedness liaison officer for S.C. As such, he is the ranking representative of Army North for the Palmetto State.

Running for office is not a new venture for Connor. In his first political campaign (2010) he made the Republican primary runoff for lieutenant governor, and then he participated in a 2014 primary run against U.S. Sen. Lindsey Graham. “Tough and expensive, but worth it when you consider the lessons learned in political races,” he said.

Among those lessons, he told the Post & Courier, “I learned to get out early and get my name out there, and I learned the importance of retail politics. People want to see, are you willing to take that effort.”

No date as yet has been set for election to the Board of Visitors, but the 30-day voting period is expected to take place sometime between July and Sept. 2020.