When the principal stopped by for an official observation, the class went well. The only area of improvement was the physical classroom environment. My room tends to be a bit messy so I was prepared for a lecture on using glitter in a carpeted space or about not using the hot glue gun on painted surfaces.

I was not expecting a discussion about a timeline, but my principal’s point was a good one. If you looked at that faded classroom decoration, every person of historical significance was male and white. At first I was defensive. I didn’t choose it. I didn’t put it up. It had always been there – no telling how long.

My principal didn’t tell me to take it down. He just asked me to give it some thought. I did, and I decided to do something completely different. No more timelines for me. I chose a piece of art to represent each unit of the curriculum. I made an gallery on the back wall – a wall of history. 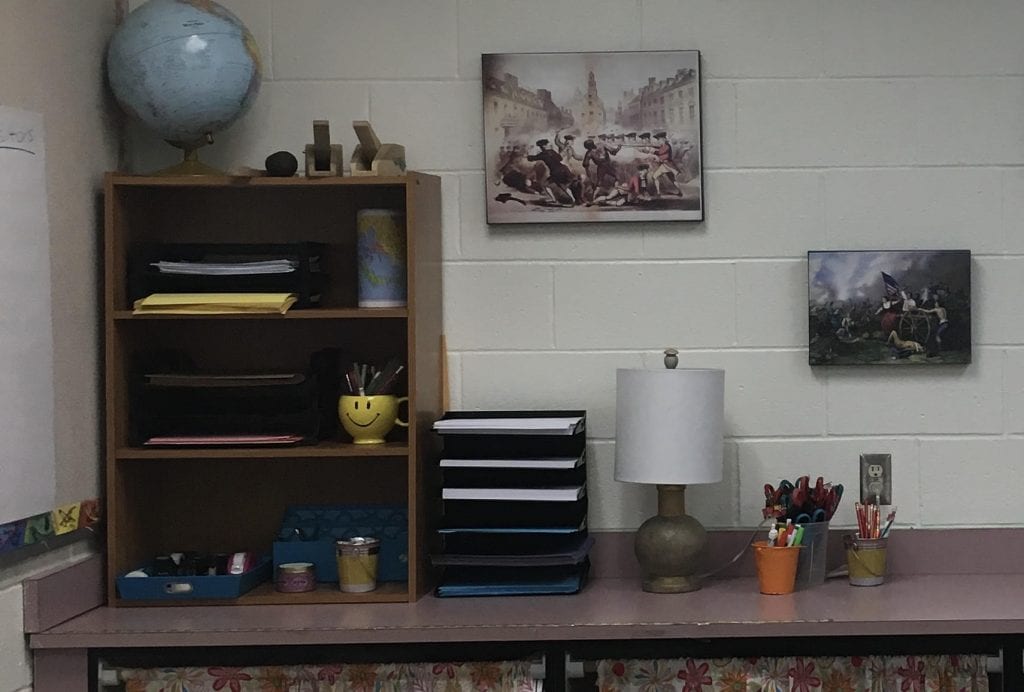 For the unit on the early settlements I ordered a copy of The Baptism of Pocahontas by John Gadsby Chapman. My dated timeline only included Captain John Smith and John Rolfe to represent the first permanent English settlement, but the painting I chose showed a fuller cast of characters, including Pocahontas and her father, Chief Powhatan.

For the next unit, I chose Paul Revere’s engraving of the Boston Massacre that shows a wounded Crispus Attucks. Attucks, the first man to die in the skirmish that would lead to the American Revolution, was a runaway slave. The story of Crispus Attucks and the Boston Massacre always leads to discussions about propaganda and the irony of men fighting for freedom for some, but not all. The engraving, which shows a black man, soldiers, gentlemen, and ordinary citizens, brings the event to life.

A painting by D.M. Carter shows Molly Pitcher at the Battle of Monmouth. All students, not just the girls, love learning about the woman who had seen her husband load the cannon so many times that when he was shot, she stepped up and took over for him. You can’t teach history without teaching key battles, but we can’t leave out the stories of the women who carried water to the men on those battlefields. So many Molly Pitchers and so many stories. We need to tell them all. Everyone made sacrifices. Everyone was afraid. Everyone suffered loss. It’s all important. We need to tell all the stories. History, like any good story, is much better when you have different perspectives.

I never intentionally created a classroom that only highlighted great white men. My principal knew that. As we went through his observation notes, he wasn’t criticizing me. He was simply encouraging me to make more thoughtful decisions. He wanted me to see my classroom through a wider lens.

I was doing a good job with my content. I was telling the stories of strong, remarkable men and women, but you’d never know that if you just walked in to my classroom. Every poster, every decoration celebrated the super stars who were white men. Now my classroom is more inclusive and more interesting than ever before.

My students can look at Pocahontas and Molly Pitcher and think they, too, can be brave and take chances. They can step out of traditional roles and do things that haven’t been done before. My students see Chief Powhatan and Crispus Attucks, and they know people of many colors make up US History.

Teachers never like to see their principal walk into their classroom and certainly don’t like hearing the words, “I’m here to observe,” but I’m thankful for my boss’s insights that day. He helped me become a better teacher. Our conversation about inclusion was important. I’m glad I tossed the dated timeline that gave a lopsided view of history and replaced it with a beautiful gallery that shows the contributions of many.

Tammy Davis is a writer based in Columbia, SC. Subscribe at www.tammydavistories.com to have her column emailed each week.