The vessels resemble, cousins of a sort, my worn canteen and its shiny glass companion. The two came to me by dissimilar routes. A friend brought me the rum from Key West down where that writer and his six-toed cats held sway. The rum gives tailgating at Georgia Bulldog games a touch of Hemingway as we talk rivalries with War Eagles and Volunteers and make bold predictions.

The canteen tells a weightier story. Made in 1942, it hung from a nail on a roof support in my parent’s attic, hung there for more than seven decades. Through the years, the canvas cover vanished. In darkness the naked vessel endured a Georgia summer. Come winter, it chilled, but not as the hip crowd bandies. 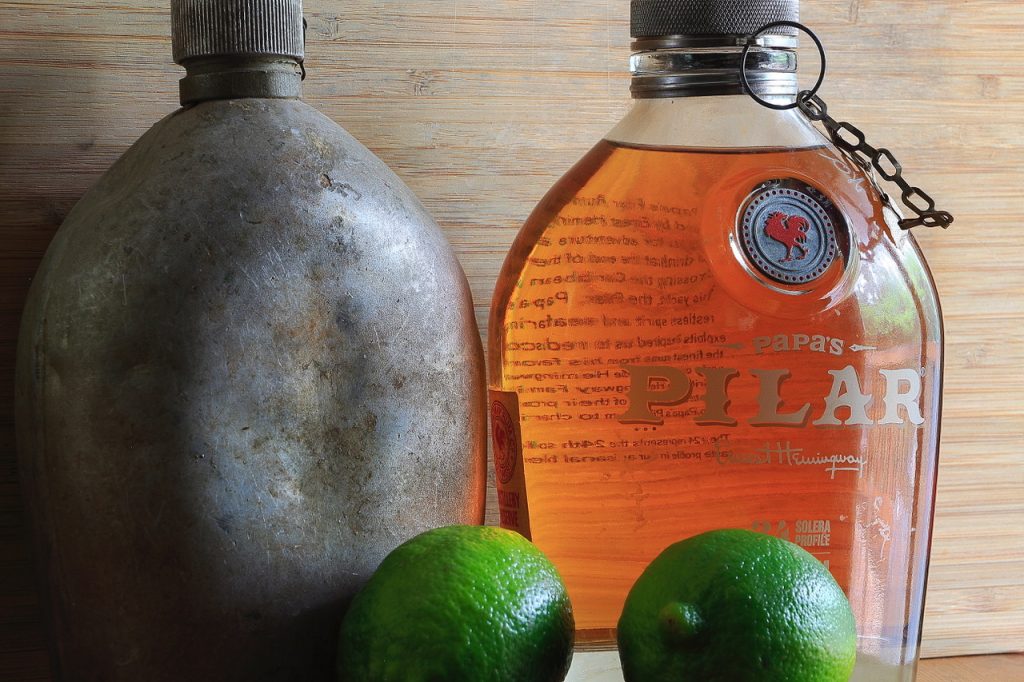 Shoulder to shoulder, the canteen and the bottle it inspired.

“Chill man.” (I’m no fan of slighting the English language. Talk like you have some sense.)

In that attic in a dark spot, the canteen patiently waited for me to discover it and I did. Dad had brought it home from Hiroshima. I brought it across the Savannah to my Carolina home.

On the canteen’s back A.G. M. is imprinted. That stands for Aluminum Goods Manufacturing. The back possesses a big dent as well, perhaps the result of a maneuver where a gun butt struck it, maybe. Something heavy struck it.

Something heavy, that would be Hiroshima. Dad spent a year there and he went to Nagasaki too.

Dad never mentioned his canteen and I don’t recall seeing it growing up. He just didn’t talk about Hiroshima and Nagasaki and I suspect you and I wouldn’t have either.

The canteen’s been dry a long time. Seventy-five years I figure. I want to drink water from it, some “cool, cool water” as Eddie Money sang. To do so, I must get it to a usable state. Might it hold some degree of radioactivity? I don’t think so. Once I get it clean as a whistle, I’ll take it afield when I’m on some back road capturing a story for you, my reader.

Now, that bottle of rum. Quite a different story. It’s named for Hemingway’s boat, Pilar, the one he used to fish the Gulf Stream. Legend holds that during World War II he set out in Pilar, armed with a Thompson machine gun, to search for German U-boats. (That would be submarines, oh-so-cool hipsters.) Lots of stories swirl around Hemingway and Pilar, and I’m sure he swilled many a rum on his 38-foot fishing boat.

Swirling and swilling … It’s been said that drinking and writing go together like pen and paper and Cormac McCarthy claims that drinking is among a writer’s occupational hazards. Faulkner would agree. So would Truman Capote and Scott Fitzgerald and let’s not overlook Edgar Allen Poe or Dylan Thomas.

“I drink to make other people more interesting,” said Hemingway. I read that Hemingway drank dark rum, and whether he went into the Gulf Stream hunting submarines or not matters not to me. What matters is that right here timelines cross. The US Army’s World War II canteen inspired the bottle that holds Pilar Rum. The boat that gives the rum its name took part in World War II a tad, we’ll conjecture.

And what about this rum? Pilar Rum’s ad men describe it as having “complex notes of rich maple, dark chocolate, ripe fig, and candied orange.” Hemingway wouldn’t have written that. It’s sissified. No, he’d have written, “Just open it, swig, wipe your mouth, and kiss a pretty woman.”

After giving Dad’s canteen a thorough cleansing, I’ll fill it with Pilar Rum. That spirit distilled from sugar cane products needs to wet the innards of its marketing progenitor. I’ll bring the bottle along too. I’ll tell my bulldog-barking friends that although it’s 7,782 miles from Key West to Hiroshima, a taste of writing and war are just a swig away. Glass or aluminum, take your pick.