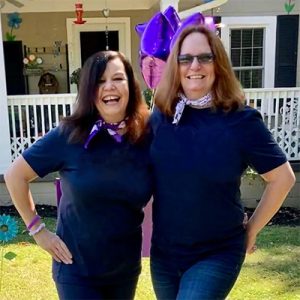 The Alzheimer’s Association has selected Greenville resident Maria Turner and Clover resident Laurie Waters to serve on its 2020-2021 National Early-Stage Advisory Group (ESAG). Turner and Waters were chosen from among 50 applicants across the country to serve on the select group of 8 advisors, each living with a diagnosis of Alzheimer’s or other dementia.

More than 5 million Americans are currently living with Alzheimer’s disease, including 95,000 in South Carolina. ESAG members play an important role in giving voices to those living with the disease by sharing their personal insights and experiences. They also advocate for core Alzheimer’s Association efforts: increasing concern and awareness of the disease, enhancing care and support programs for individuals and families, advancing public policy initiatives, and championing support for disease research.

“Early-stage advisors bring a unique perspective that not only informs our work, but also inspires others living with the disease to connect with support and help make a difference for all those impacted,” said Cindy Alewine, President/CEO of the Alzheimer’s Association South Carolina Chapter. “In the face of life-changing diagnoses, Maria and Laurie have chosen to use their experiences as a platform to reach others, especially those impacted at a young age like themselves.”

In the midst of the isolating COVID-19 pandemic, Turner and Waters are connecting people across South Carolina and beyond through a virtual Peer-to-Peer support program offered through the Alzheimer’s Association. This unique program gives diagnosed individuals a chance to engage with others who are coping with similar challenges in a safe, supportive and understanding online setting.

Maria Turner, BSN, of Greenville, SC, was diagnosed with the non-behavioral variant of
Frontotemporal dementia (FTD) and ALS at age 48 in 2016. Following more comprehensive testing, she was diagnosed with Alzheimer’s disease and probable Chronic Traumatic Encephalopathy (CTE) resulting from concussions and head injuries earlier in life. Originally from Wales, United Kingdom, Turner moved to the United States in 2003. She worked as a registered nurse and nursing educator in intensive and cardiac care for 30 years before her diagnosis forced her early retirement.

As a member of the Alzheimer’s Association National Early-Stage Advisory Group, Turner wants to help reduce the stigma and discrimination that can accompany an Alzheimer’s or dementia diagnosis. She is passionate about educating others about the importance of early detection.

“If I can walk alongside just one person and prevent them from having to go it alone, I will know
that I had a part in breaking down barriers and helping end the stigma of dementia,” said Turner.

Turner would like to see more diagnosed individuals connected with local support services, like the Peer2Peer support program that she facilitates with Waters. She considers her support group peers an essential component of her support network, along with a diverse group of friends who encourage and support her to live independently for as long as possible. Turner is also an avid user of apps, technology and devices to help coordinate her daily routines, meetings, and appointments.

“Life doesn’t end with a dementia diagnosis — a new life begins,” Turner said. “It’s really important to connect with and support others who understand what you are going through. With the support of others, I am making the most of this next phase in my life.”

Laurie Waters of Clover, SC, was diagnosed with early-onset Alzheimer’s disease in 2017 at age 52.
Originally from Bridgewater, Massachusetts, Waters and her husband have spent the last two decades as residents of South Carolina. A self-described workaholic, she has been the owner of two small businesses as well as a life-long volunteer. When family members and healthcare providers began to notice subtle changes in her behavior, Waters initially dismissed it as work-related stress, but further testing confirmed her diagnosis.

“When they first told me, I said ‘Are you kidding me?’” Waters recalled. “It was devastating news to hear. It was something I was not prepared for, and Alzheimer’s was a disease I knew little about.”

Now, as a member of the Alzheimer’s Association National Early Stage Advisory Group, Waters advocates for the benefits of early detection, diagnosis and acceptance.

“It is very important that the moment you start noticing signs to speak up,” Waters said. “No matter how young or old you are, if you have concerns about your thinking and memory, get it checked. I waited longer than I should have, but getting diagnosed has given me a new direction and I continue to live a full life.”

Both Waters and Turner encourage others who have been diagnosed to connect with others for support and to live their best lives right now, despite the challenges they may face. To learn more about Peer-to-Peer support and other early stage dementia programs available through the Alzheimer’s Association, visit alz.org/sc or call 800.272.3900 anytime day or night. These programs are free, online, confidential, and open to individuals living with early stage dementia no matter where they live.

“Being able to engage with others who are going through this devastating disease has been a gift,” Waters said. “I have found a second family.”

About the Alzheimer’s Association