Atlantis sank into the sea around 380 B.C. So said Plato. Its founders were half god and half human. Its lush islands contained gold and silver and supported rare, exotic wildlife. A great capital city existed on the central island. It’s the stuff of legend, and many an explorer has searched for Atlantis in vain.

Georgialina has its own Atlantis, a place called Petersburg. Its founders were Huguenots, Virginians, and Carolinians. Its gold was tobacco and river water. A capital city might have existed here, but disaster laid in wait. You can find evidence of the drowned town of Petersburg, Georgia, which had nearby sister towns, Lisbon, Georgia, and Vienna, South Carolina. Smaller than Petersburg, they too sit beneath water but when they sat high and dry Lisbon, Petersburg, and Vienna residents could see each other’s town. The Broad River separated Petersburg from Lisbon. The Savannah River set Vienna apart. Across the rivers; there they were. 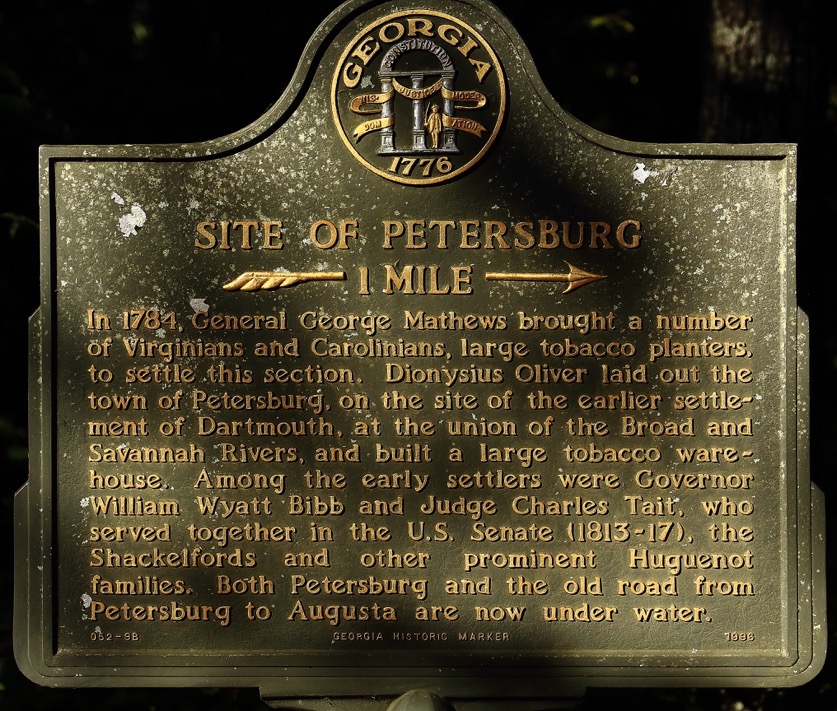 Petersburg sat in the forks of the Savannah and Broad Rivers. For ten years, it ranked as Georgia’s third-largest city behind Savannah and Augusta. It rose to prominence as a tobacco inspection site and had a post office and newspaper. Plays, balls, promenades, picnics, and community celebrations made life interesting. Doctors, lawyers, and politicians lived there. Two U.S. Senators lived here and served at the same time, a record still.

Petersburg was considered as a site for Georgia’s capital, but here come bad luck and bad timing. Can you hear the death knell? Cotton replaced tobacco as a cash crop, the steamboat robbed Petersburg of commerce above the fall line, and the Savannah and Broad Rivers cut off railroads. New land to the west lured people away and Western Fever ran many remaining residents off. And then down the long road, a mighty dam rose. 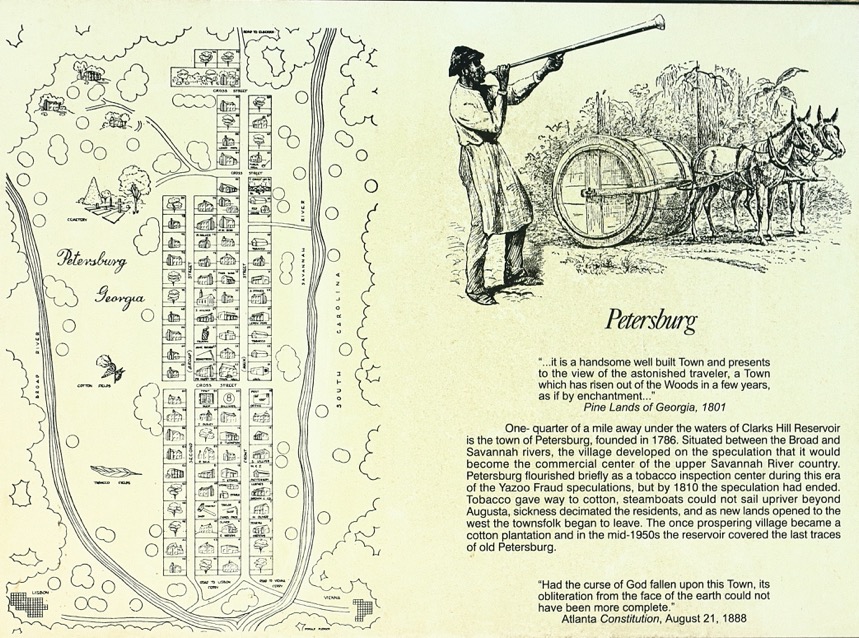 Years ago when drought laid the lake low, my sister and I boated there. Water a foot deep washed over Petersburg’s remnants. Foundations, streets, nails, bricks, pottery sherds, broken glass, and the detritus of a vanquished civilization shimmered in the water … felt eerie to walk drowned city streets.

Recently I went back by land to look over that watery grave from the Lincoln County side but a gate and berm blocked Lisbon Road. A considerable drive later I arrived at Bobby Brown Park and made my way downhill through dense woods. I came across what appeared to be an old cemetery. Stones of various size and color sat here and there, as if some prehistoric game of bocce ball had occurred. Cedars, descendants perhaps of some ancient cedar long returned to the earth, stood over the stones. Purple irises fanned out here and there. Hand-made bricks sat among the stones. This small cemetery uphill from Petersburg, was visible, perhaps, to loved ones below.

Down at the water’s edge I looked over Petersburg’s watery roof. A pileated woodpecker’s cry gave the dense woods an Amazon vibe. Noisy jet skis, pontoon boats, fishing boats, and sport boats were cruising and flying over our own Atlantis. I looked around at the driftwood, a blue darter, and sand. Perhaps artifacts hid there. I stared at all that water, what used to be sky to people long gone. Not once did they dream that their homes would become lake bottom. For a moment I permitted myself a fancy, that they still lived there and could look up and see strange creatures gliding over their homes. 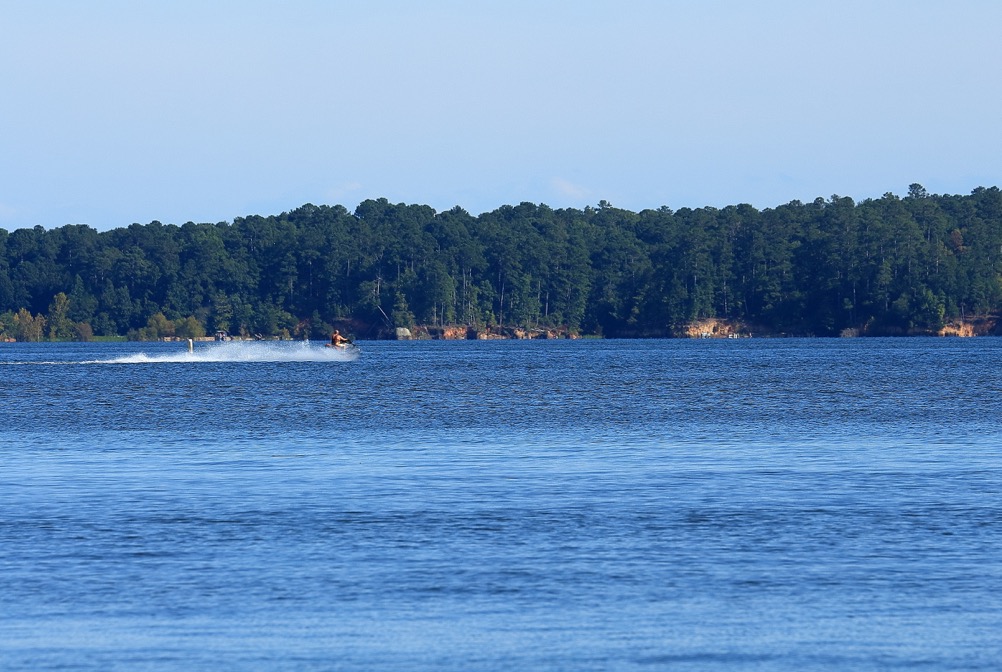 On August 21, 1888, the Atlanta Constitution wrote, “Had the hand of God fallen upon this town, its obliteration form the face of the Earth could not have been more complete.”

There’s a lesson here. You cannot know what might come of your home. Fire, wind, and water take their toll, but man’s grand designs take more. Plato invented Atlantis, but Petersburg, Lisbon, and Vienna were real. When the lake drops enough, I plan to wade through remnants of what might have been Georgia’s capital. It will be quiet. Fewer boats. Fewer people. Just watery spirits and me.