Something like sixty years had passed since I saw it. This time, however, I saw it from above. The WPA built a beautiful tower of stone so you can get a birds-eye view of a bird of stone. That would be Rock Eagle, although some say it’s a buzzard. Some simply refer to it as a bird.

The experts say Woodland Indians who predated the Cherokee and Creek built Rock Eagle 1,000 to 3,000 years ago. No one can say why they built the large rock mound, which measures 102 feet from head to tail and 120 feet wide from wing tip to tip. The mound sits high above sloping woodlands and I wondered just how they carried all the large quartz stones to the site. One at a time? Pulled by a team of men on some primitive sled? Lots of rocks here for sure. The mound rises ten feet off the ground.

My parents sent me off to 4-H Camp in Putnam County, Georgia all those summers ago. Head, Heart, Hands, and Health. That’s what 4-H represented. Is good wholesome stuff like that still allowed today? 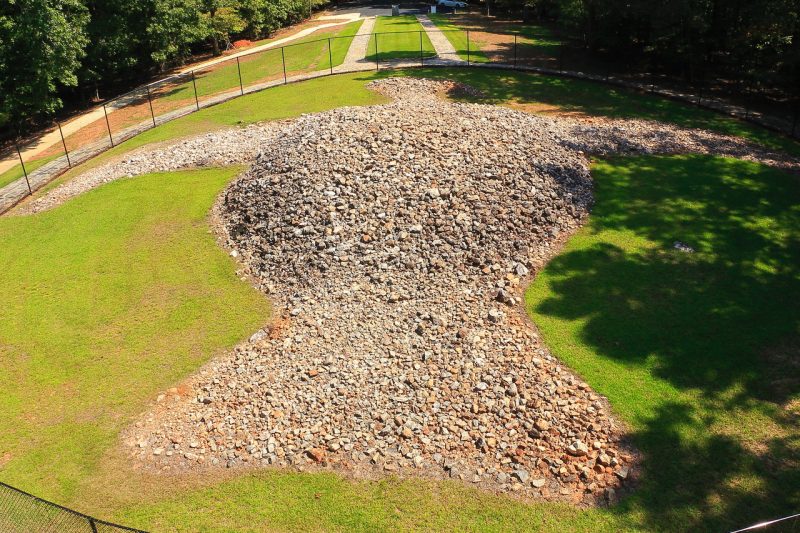 You’d have to go west of the Mississippi River to see similar mounds.

Rock Eagle has stayed with me for many years now. I learned crafts there such as working with leather, and I have a small coin pouch to this day to prove it. I remember swimming and canoeing too. There was that 4-H business too where elders tried to make us better people.

Most of all, I remember the large bird of stone, what learned folks call an effigy. No, I remember too some prankster short sheeted my bed one night, placing pinecones in it as well. You carry misdeeds and injustice all your life, you know.

As a boy I stood right by the fan of rocks that represents the bird’s tail feathers. I recall them as burning bright white in the Georgia sun. Not so much today. If you make the drive over there be prepared to see rocks that are gray, some darker, and some still bright white. Be prepared too for the fence that encloses it now. Best to keep the meddlers at bay.

This large effigy, this big bird of stone? A burial place? A way to send a message to the gods? A ceremonial site? We don’t know. We do know that the University of Georgia administers the site today and we do know that the bird’s head faces east to greet the rising sun. We know, too, that a 1950’s research project discovered evidence of cremated human remains.

You can visit it for free. It stands in the region of Madison and Eatonton, Georgia. Another effigy, that of a hawk, greets the sky in the vicinity, but it doesn’t catch the attention as Rock Eagle does. On the National Register of Historic Places, it’s there waiting for you. From dawn to dusk, you can see it, and climbing the stone tower is well worth your time.