An ancient giant dolphin skeleton in the Lowcountry is helping to answer questions about the evolution of early branching dolphins.

The well-preserved 24 million-year-old skeleton of a giant dolphin, Ankylorhiza tiedemani, was discovered in the 1990s by College of Charleston alumnus and commercial paleontologist Mark Havenstein ’88. The skeleton was later acquired by private fossil collector Mace Brown and subsequently donated to the Mace Brown Museum of Natural History at College of Charleston. 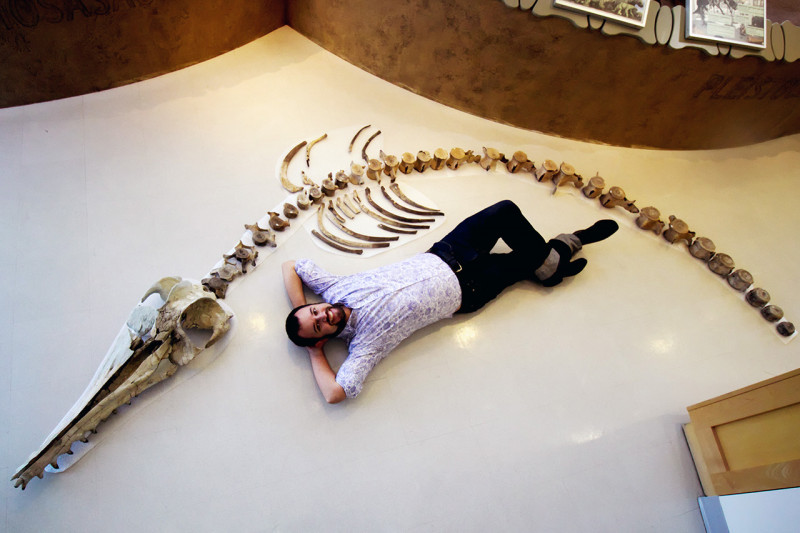 The skeleton includes a well-preserved skull, most of the vertebral column, ribcage and one flipper.

Robert Boessenecker, adjunct lecturer in the Department of Geology and Environmental Geosciences, says the discovery is important because it is one of the first skeletons found of a very early member of the toothed whales (dolphins, porpoises, sperm whales), shortly after they diverged around 35-36 million years ago from baleen whales.

“What makes that important is its evolutionary position as a very early branching dolphin,” says Boessenecker. “Most early dolphins are known only from skulls, so having a skeleton with flippers and most of the vertebrae gives us an unprecedented look into the evolution of swimming adaptations. That unprecedented window surprisingly told us that baleen whales and dolphins have many similarities owing to convergent evolution since their evolutionary split 35 million years ago.”

He says the skeleton shows a few adaptations for faster swimming than other smaller dolphins, but also shows several primitive features.

“These primitive features are surprising because paleontologists and biologists long assumed that many of the adaptations for rapid swimming in baleen whales and toothed whales were ancient adaptations shared thanks to their common heritage over the past 35 million years,” says Boessenecker.

The study is published in the journal Current Biology.