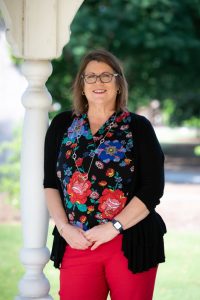 Anissa Lawrence rolled the dice on her future when she left Las Vegas and made the decision to move across the country to Greenwood.

She didn’t know it then, but the odds were in her favor. Not only did the former special events coordinator leave the bright lights of the Nevada casinos behind, but Lawrence embarked on a journey in higher education for which the dividends could not have been more rewarding.

No one would ever suspect that Lawrence, the recipient of Lander University’s Outstanding LINK Instructor Award, had ever been a college dropout. “I was a college dropout several times, in fact,” said Lawrence, Lander’s Academic Transfer Coordinator, who researched Greenwood extensively before settling into her new home in 2010.

LINK, short for Learning, Involvement, Networking and Knowledge, helps Lander’s first-year students make the transition from high school to college. Lawrence, who joined the LINK faculty in Fall of 2020, said, “The program encourages students to be involved on campus and in the community. It also supports their individual goals and provides them with the knowledge and resources to reach their goals.”

Freshmen arrive on campus “with different skill sets, strengths and weaknesses,” she said. “We are here to help them access the services they need to be successful.”

She said many of the freshmen entering last August had high stress levels, which was not unexpected by University faculty, staff and administrators.

“Their world was very different. First, this was their first time in a college setting, and, second, they were dealing with in-person, online or hybrid schedules because of the pandemic. It was a challenging time, and we focused on finding ways to help them succeed.”

Students were aware that COVID-19 could force the closing of campus at any time. “They knew that the longer they followed the rules, the longer we could stay on campus. They did that. The University never had to close, and they should be proud of themselves for the sacrifices that they made to make this happen,” Lawrence said.

“Our students were part of a moment in history, but they learned to adapt and persevere through a difficult time,” she said. “These are skills that they will take into the future.”

After her first LINK class in August, Lawrence emailed students to ask them a question – “what is the strangest thing you’ve ever eaten?”

She explained, “This wasn’t busy work. It was a way for me to become connected to the students.”

The connection worked. Lawrence said that students learned that they could talk to her about their problems, questions and needs for assistance. “They opened up, and LINK became very beneficial to them and helped them stay on track,” she said.

While LINK is vital in the students’ lives, Lawrence said the personal rewards for her are great. “I love having students drop by to say “I got an ‘A’ in my class, or hearing a student tell another student, “You’re with Miss Anissa. She’s the best.’ ”

She laughed. “They teach me how to be a younger and ‘cooler’ person, too. They’ve humbled me. I want to be a better person because of them and to be more positive. They show me that there are a lot of great people in the world … they give me hope.”

Although her time with each class of students is short, Lawrence said, “I let them know that even though LINK is only for one semester that I will be here to help them through their college experience. I am still a resource for them.”

Most of all there is overwhelming pride when she talks about the LINK students in her class, who refused to take a gap year in their education and braved the pandemic to come to college during the unsettling era of COVID-19. “They have raised the bar for everyone else. They’ve set a high bar for everyone who comes after them. They have shown that we can get through anything.”

That Lawrence would eventually find her way to Lander was no accident. Before coming to Greenwood, she did her online research and discovered the University. The photos of the campus were beautiful, and she felt at home even before arriving here. She began her career as an administrative specialist in the College of Arts and Humanities and then moved to the Academic Success Center. She loved talking to students and discovered that it was time to earn her own college degree. With her dropout college experiences in Nevada behind her, Lawrence completed her bachelor’s degree in interdisciplinary studies from Liberty University in 2018 and didn’t stop there. She earned an MBA in 2020, also from Liberty.

Since the fall, Lawrence also has been a volunteer with the Bear Necessities Food Pantry at Lander and was elected this spring to be chair-elect of Lander’s Staff Senate.

“It’s hard to believe that I found a true career in South Carolina and one that I love so much,” Lawrence said. “Moving here was a gamble. But I’ve found a real purpose in my life at Lander.”