The stunning portraits by artist Abigail Lynn were the center of attention by art lovers  visiting The Arts Center of Greenwood. 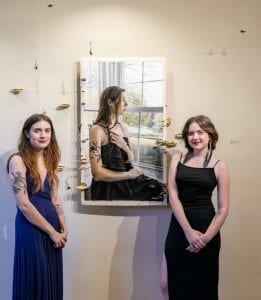 The inaugural Lander University Art Walk Uptown included an exhibit of artworks by six Lander University Students at The Arts Center of Greenwood. Artist Abigail Lynn, right, is shown with the portrait of her friend Chloe Compton. The show was the first “opening night” for the center since March 2020. Photo by Laura Brown

Lynn’s artwork was part of the Lander University Art Department’s B.F.A. Exhibit, which featured the sculpture and paintings of six students in the University’s acclaimed arts program. The exhibit was one of several stops on the recent Lander University Art Walk Uptown, an inaugural event which also showcased Lander students’ photography at the Sundance Gallery, paintings at Good Times Brewing and sculpture in outdoor locations. 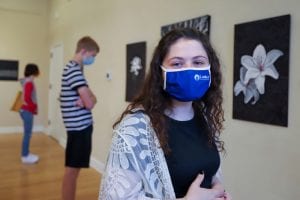 Grace White, of Newberry, created a series of dramatic black-and-white paintings for her series, titled “I Know Who I Am.” Photo by Deb Crenshaw-Nygro

Lynn, of Summerville, said, “I poured my heart and soul into this.”

It showed. People were transfixed by the art and took photographs of Lynn’s paintings, a series of works titled “Threads of Mind.” Each painting was surrounded by sculptural hangings of items, such as moss and mushrooms, that she found during walks. Lynn drew on the beauty of her friends for the paintings, and captured her own image in a self-portrait that depicted Lane with a canvas and brush.

Although the B.F.A. Exhibit is a culmination of her work at Lander, Lynn said her passion for art will extend beyond graduation. “I will continue making art every single day.”

Grace White, of Newberry, whose striking black-and-white paintings featured small tile-like pieces as background, said she was drawn to Lander by her sister Anna White, who studied graphic design at the University.

Her paintings were part of a series, titled “I Know Who I Am,” which she described as “an exploration of materials.”

“When something is assigned value in my life, I find quality time to spend on it,” she said. “The more time I put into a conversation with materials, the more I can translate that into visual information I can share with others.”

The B.F.A. Exhibit was her first gallery show as an artist, said White, 21. “It’s exciting. It makes the process of being an artist seem real. It will help me grow my work ethic.”

White said she plans to put her love of working with people to practice in a career with a nonprofit organization in the future and continue producing art with the hopes of owning her own gallery. 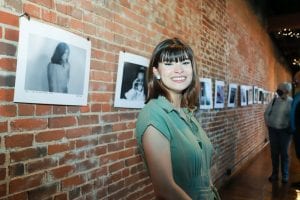 The Sundance Gallery was host to an extensive collection of Lander students’ photographs. Elizabeth Cooper, of Lexington, captured her own experiences in a series of prints. Photo by Deb Crenshaw-Nygro

The experience of an emotionally abusive relationship influenced the photographs of Elizabeth Cooper, of Lexington. “I create work that represents my personal experiences,” she said. “In this instance, it was a devastating relationship. This was a way for me to process what happened in a creative way and to grow from it.”

Cooper’s photographs were part of an extensive showing of Lander students’ photography, displayed at Sundance Gallery. The venue is owned by Lander professor Jon Holloway, a professional photographer, who worked with Uptown Greenwood officials to plan the Art Walk.

Cooper, who also enjoys pursuing her artistic talents through illustrations and drawings, hopes to work as an illustrator, concept artist and storyboard artist.

During her visits to college campuses as a high school student, Cooper said she was drawn to Lander because of its comprehensive arts program. “You learn ceramics, painting, sculpture and so much more. Lander helps you become a well-rounded artist.”

The opening night of the B.F.A. Exhibit at the Arts Center, which comprised the works of six Lander students, was impressive, said Jennifer Smith, the center’s gallery and marketing director.

“Over 11 years, I have seen the changes and expansion of Lander’s art program, including the addition of new degrees,” she said. “Where you really see the growth is in the quality of the work being produced by the students. I think this show is a reflection of that.”

Not only did the students have to complete a body of work to be shown, but each had to plan where their works would appear in the center, develop themes for their individual displays and install the art in the space. “To see all of it come together was awesome,” Smith said.

The show provided a sense of normalcy for the Arts Center, which has been impacted by COVID-19 as arts throughout the world have. “For us to be able to come together safely for this event was good for everyone. It was a big night,” she said. “Having the first Lander University Art Walk was a wonderful idea, and it represents a great partnership between Uptown and Lander University. I hope it will grow.”

The Art Walk also featured music, along with pottery and basket-weaving demonstrations, at Main & Maxwell and music in the courtyard of The Greenwood Building.