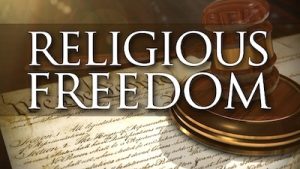 South Carolina Attorney General Alan Wilson applauded the decision released today by the Supreme Court of the United States that protects the religious rights of public employees. The Court ruled in a Washington state case that high school football coach Joe Kennedy had a right to pray silently on the football field after games and that those prayers did not “establish a religion.”

“The school district prohibited Coach Kennedy from exercising his First Amendment rights out of a baseless fear that his individual prayers violated the Establishment Clause,” Attorney General Wilson said. “No reasonable person would believe that Coach Kennedy’s silent prayers on the field are government endorsement of a religion. The fact that the district suspended him is saying public employees cannot exercise their right to worship without fear of losing their jobs. Coach Kennedy’s constitutional right to pray has thankfully been upheld because we need prayer now more than ever.”

Writing for the majority in the 6-3 ruling, Justice Neil Gorsuch wrote, “The Constitution and the best of our traditions counsel mutual respect and tolerance, not censorship and suppression, for religious and nonreligious views alike.”