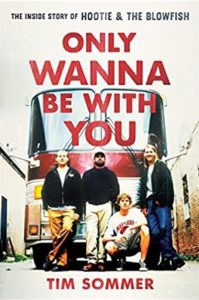 When I first started “Only Wanna Be With You,” I anticipated a bit of a tell-all rag. The author is Tim Sommer, a music journalist and record executive who was part of the Hootie and the Blowfish inner circle for many years. And isn’t it the job description of a former insider to write a book that airs all the dirty laundry?

However, with much of the story told through long-form direct quotes from the band members and others, I gradually came to trust the author was genuinely telling a story that sometimes seemed almost too good to be true. Four USC students form a band. They find fame, get rich, make good business decisions (for the most part), experience some fortunate convergences of circumstances, move on for various reasons (but insist they aren’t breaking up), reunite for a blockbuster tour and new album, and remain friends for 25 years.

The story of the band members’ friendship, electric musical connection, and complete focus on the band’s – not their individual – success was compelling and entertaining. However, what I found most interesting was the insider’s peek at the complexities of the music business and the nuances of the music that influenced the band.

Admittedly, I’m not cool enough to get all the references to Hootie’s musical influences like REM and other classic rock staples. And I sure don’t have any context around the grunge bands competing at the top of the music charts at the time. But I learned a lot about intersecting music genres and how they inspired Hootie’s sound.

For anyone who was 18 – 30 during the big Hootie years, read this book for the nostalgia. The references to Green Streets, Rockafellas, Five Points and dorms that no longer exist at USC will make you smile and remember dollar pitchers at happy hour.

For fans of the band, the book tells great behind-the-scenes stories about how their music came to be and what influenced it. And for anyone just curious about how four guys from USC ended up selling more than 20 million albums, this is the summer book for you. (And as a bonus, it’s published by the University of SC Press.)

Reba Hull Campbell is president of the Medway Group, a big word nerd and avid summertime reader. This is the first of (what she hopes will be) a dozen or so “Blink Book Reviews” for the summer. She’s challenging herself to keep them to 300-ish words so readers can skim them in a couple of blinks. Her choice of this book has a bit of a backstory to it. Read it here.