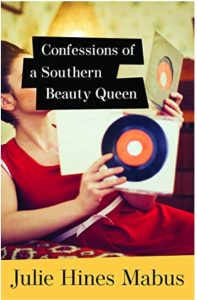 “Confessions of a Southern Beauty Queen” opens in 1968 with Patsy Channing awaiting suspension from the Mississippi College for Women, known as “The W,” following an alleged violation of the college’s strict dating rules. The book’s narrative weaves between Patsy’s college experiences and her life growing up in a small Memphis apartment with a single, chain-smoking, Valium-addicted mother who may, or may not, be sleeping with her banker boss.

Patsy aspires to be Miss America and sees the college’s beauty pageant as her ticket. Her pitch-perfect voice and breathtaking beauty make this a distinct possibility. But Patsy’s naivety about unspoken childhood trauma and her refusal to follow the narrow social strictures of the time get in the way.

The book takes place against a backdrop of issues gripping the country at the time – racism, women’s rights, and social inequities – overlaid with ubiquitous “mean girl” politics that follow Patsy from kindergarten through college. Patsy’s outsider status among the “old southern” families, her eventual push to challenge the system, and her stunning beauty shape the narrative of the book and drive her sense of fairness on several fronts.

As I read, I did want some of the story lines to be more deeply connected or fleshed out. One story line that particularly drew me in – and left me wanting to know more – was Patsy’s friendship with a Memphis guitar player aligned with the famous Stax Recording studios. Their relationship weaves throughout the book providing an intriguing link from Patsy to the unfolding story of Memphis blues music and the underlying southern racial tensions.

Overall, I immensely enjoyed this book. It left me with insight about a period of our southern history that I’m not quite old enough to remember. Patsy’s experiences are a half-generation ahead of me, so I don’t have first-hand recollections of the 1960’s politics of race or this era’s evolving role of women.

After finishing the book, I remain haunted by many of the experiences described – some more gently alluded to and others more overtly depicted. The book does end somewhat abruptly. Given the fact it’s biographical in nature, I’m left wanting to know more about what happened to the real Patsy Channing – how these experiences in her young life shaped the rest of her years and how her situation ultimately influenced policies at “The W.”

Reba Hull Campbell is president of the Medway Group, a big word nerd and avid summertime reader. This is part of her summer reading discipline to get off the screen and back to books in a dozen or so “Blink Book Reviews.” She’s challenging herself to keep them to 300-ish words so readers can skim them in a couple of blinks. Reach Reba at [email protected]. Read previous reviews at Random Connect Points.