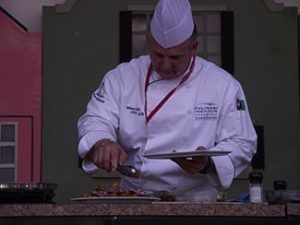 Charleston’s award-winning Bulldog Tours is adding to its culinary tour offerings with a new option that includes a cooking demonstration and tasting.

Bulldog Tours is partnering with the Culinary Institute of Charleston at Trident Technical College on “Taste of the Lowcountry.” Visitors will get an exclusive look at a local culinary institution – the brains behind the ever-evolving restaurant scene in Charleston. Using locally-sourced products, the chef will create a culinary masterpiece filled with seasonal flavors to fulfill your palate.

Taste of the Lowcountry kicks off on Thursday, Sept. 21. Tours will be offered on Thursdays only and run from 9:30 a.m. until noon. Guests should meet at Mercantile and Mash, 701 East Bay St., for an introduction to Charleston’s culinary history. Cost is $60 per person and reservations are required at www.bulldogtours.com.

Since 2001, Bulldog Tours has been educating and entertaining visitors with its history and ghost tours, as well as a series of culinary tours that showcase Charleston’s reputation as a must-visit city for foodies and culinary connoisseurs.

Bulldog Tours offers five other culinary tours, including a chef’s kitchen tour, a dessert tour and a tour that highlights the trendy Upper King Street restaurants.

“We know people are coming to Charleston to eat. They want to know about the best restaurants, the award-winning chefs and secret behind why Charleston’s cuisine is so special,” said Bulldog Tours founder John LaVerne. “We’re looking forward to partnering with Culinary Institute of Charleston to give visitors a first-hand look at Southern cooking while showcasing an organization that is training up the next generation of incredible Charleston chefs.”

About Bulldog Tours
Since 2001, Bulldog Tours has been entertaining visitors with tales of Charleston’s haunted past and dark secrets. A seven-time winner of the “best tour company” award in the Charleston City Paper’s “Best Of,” Bulldog is known for its commitment to preservation, its community pride and an overwhelming dedication to promoting Charleston. The organization also has raised more than $3.1 million for preservation of Charleston’s historic buildings. Bulldog also offers several history and culinary tours. For more information, visit bulldogtours.com.