Sunday night the moon hung full and bright over treetops. Like some silver dollar hurled into the night she floated full and beautiful, though pollen gave it a gold cast. Tonight’s a perfect night for moonshining I thought. Yes, by the light of the silvery moon old stills would have been a’working back in the day.

Moonshine was on my mind for a good reason. The next morning my friend, Ralph Scurry, would take me to the remnants of an old still. 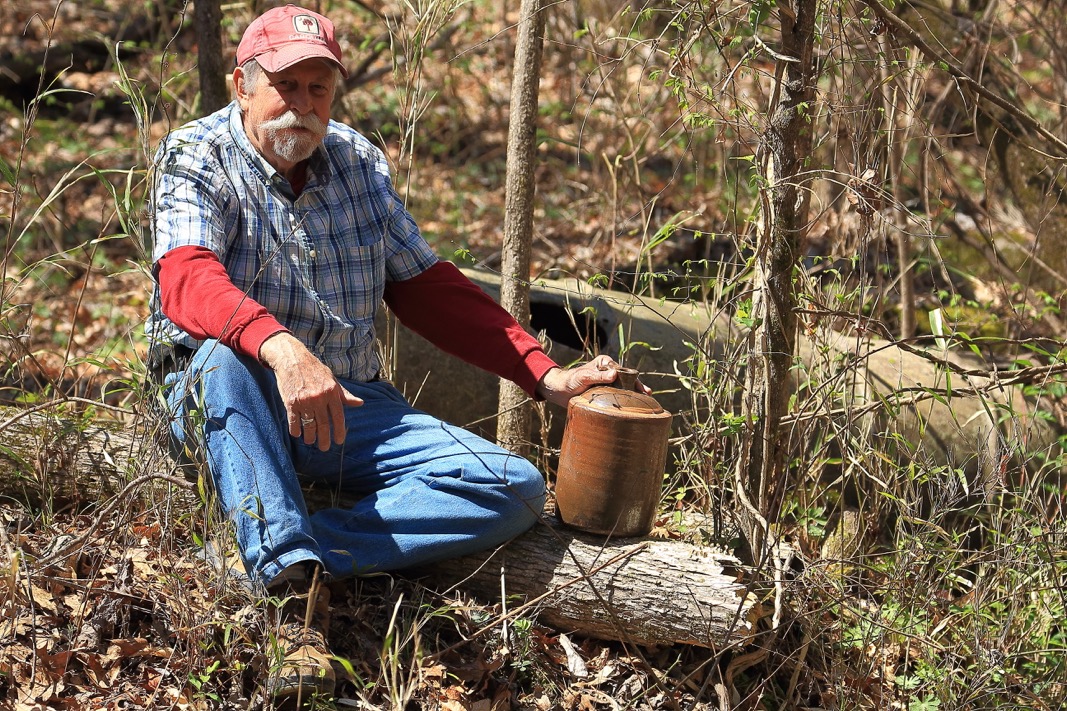 Monday morning broke in a yellow haze. Jimi Hendrix had his Purple Haze where he wanted to kiss the sky, but I was driving through a yellow haze and I wanted to kick the sky. My windshield took on a dirty yellow cast but on I drove through a gold dust sky thinking of white lightning and the greenbacks it brought Granddad so many years ago.

During the parched years of Prohibition, Granddad perfected his moonshine, “the best liquor in the county” as one farmhand told me. He didn’t kill or blind people by using radiators and lead solder. He made quality white lightning, and quality moonshine depended on using safe equipment, good clean water, a “secret” ingredient, a secluded spot near a spring or creek, and, of course, avoiding the infernal Revenuers. (The secret ingredient I learned was often sweet feed.) 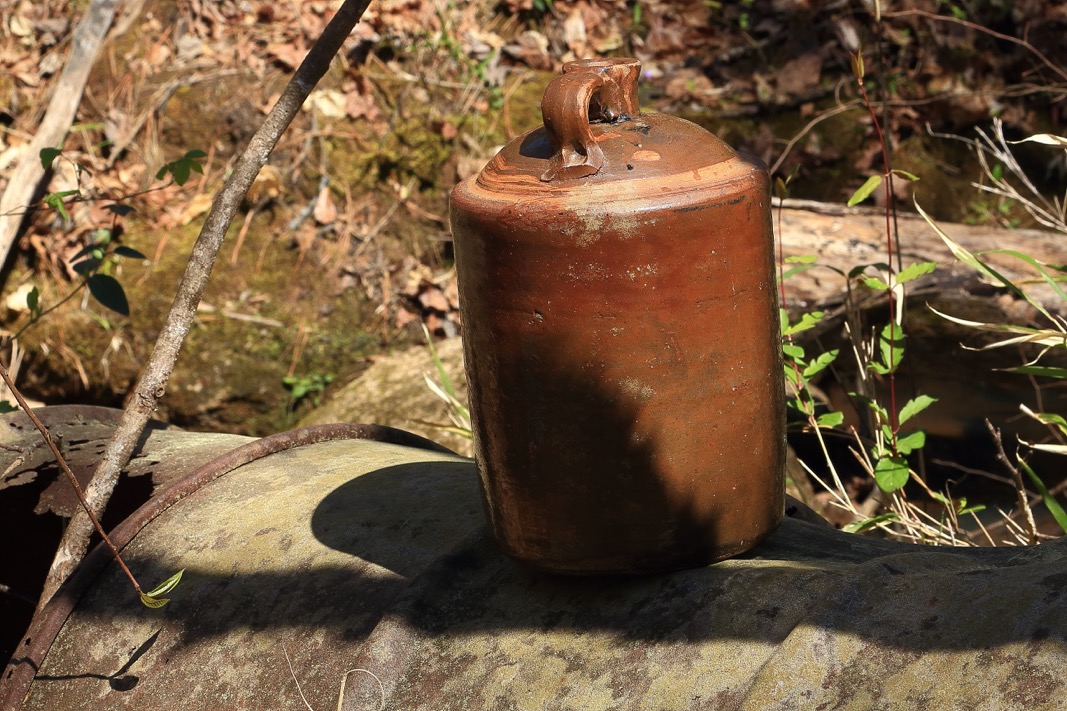 I met Ralph at his beautiful home with its historic log cabin and tracts where some state record trees reach for the sky. I got into Ralph’s fine old pickup truck with a golf cart in tow and down a dirt road we went. He unloaded his golf cart, and we rode past an old home place with its hand-dug well and thick tangles of periwinkle, past emerald green wildlife food plots of clover and radiant redbuds to a place where the land fell off with huge stones here and there.

Then down toward a spring-fed stream I saw rusty barrels—all that remain from a one-time do-it-yourself distillery. Ralph and I walked down to the stream, clear as a bell, and sat his whiskey jug atop a barrel. He found the handsome jug in a hillside within earshot of the still. It’s an early Baynham stacker jug, so named because they could be stacked one atop another in the kiln. I have no doubt moonshiners stacked them too. The Edgefield pot made for a good prop.

I stood upstream from the rusting barrels and imagined a fire cooking mash, copper tubing and coils, barrels, and stacker jugs. Sure moonshining was illegal but more importantly it was the Southern thing to do. Many a farmer ran a still. Granddad did. Raising a few crops, cattle, and chickens made a farmer self sufficient, something we can’t lay claim to today. Those old fellows needed a drink now and then so why not become self sufficient as that goes as well.

Then the “govmint” as some folks call it decided to ban alcohol thereby turning moonshine into a cash crop and something more—a legend of fearless mountain men, a history tied to NASCAR, and epic tales as opportunistic farmers go. My granddad has a tale that involves a trip to the crossbars hotel but that’s a story for another day.

To heck with jail, moonshining was the Southern thing to do and there before my eyes stood the rusty proof. There were times when those barrels gleamed by the light of the silvery moon. Now they rust by day and night, and in due course will return to the earth carrying the faintest trace of corn whiskey. For now they remain, a reminder of times gone way downstream into that land we can only remember and dream about, a place called The Past.