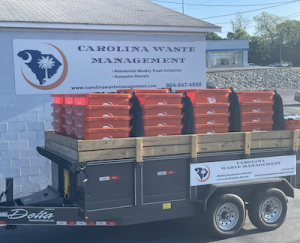 The City of Laurens has given notice that it will terminate its contract with Green For Life (GFL), formerly Waste Industries, Inc., and replace the provider when its contract expires in February 2023. City officials cite ongoing service quality issues and the need to respond to community concerns as the main reasons for switching providers.

“We are fed up, the community is fed up, and it is time for a change,” said Laurens Mayor Nathan Senn.

Like many communities, the City does not collect its own household waste. The savings of not having to maintain a fleet of trash trucks, additional employees, and all the other operational costs of a city trash service have helped the City of Laurens avoid raising property taxes for nearly 40 years. Instead, in 2011, City leaders opted to utilize a free market option, leveraging the combined bargaining power of every household, and began using a private contractor to offer this service to residents.

However, despite some savings, the former arrangement positioned the City as the middle-man customer service and billing department of this private company. Although the City does not provide household trash service and has no direct control over how these services were delivered, the soon-to-expire arrangement obligates City staff to take payments and send out customer bills each month, costing taxpayers thousands of dollars each year.

As costs to the City have risen and the quality of service suffered, city leaders demanded change.

“We met with Waste Industries and GFL and had very frank conversations with them about these issues on multiple occasions,” said Mayor Senn. “They have ‘explained’ all sorts of reasons for their ongoing issues, and they have given all sorts of assurances that service would improve. And yet, just this past week, we continue to have entire streets that did not have their trash picked up on trash day. That is unacceptable.”

City officials cite the fact that the Mayor’s, City Administrator’s, and Streets and Sanitation Department Director’s in-person meetings with GFL representatives are far from the only complaints GFL has received from Laurens.

“Each week we receive all sorts of complaints at City Hall from residents who have service issues, and unfortunately, usually the only thing we can do is pass these along to the appropriate supervisor at GFL,” said City Administrator Eric Delgado. “The current arrangement does not make sense.”

City Administrator Delgado provided written notice to GFL on July 20, 2022, that the City intended not to renew service by extending its current contract. However, that did not necessarily mean that the City’s relationship with GFL was over.

A request for bids to provide the city’s household trash service was submitted to South Carolina Business Opportunities and published in the Laurens County Advertiser for four weeks. The City’s “Request for Proposal” was patterned after that of other communities and was intended to correct some of the negative aspects of the City’s current arrangements. For example, qualifying bids were required to include direct billing and customer service for residents.

During the bidding process, the City received requests for information from Waste Connections Inc., GFL, and Carolina Waste Management. Bids for a new service contract were due on Friday, September 30, 2022, and were opened Monday, October 3, 2022. Ultimately, Carolina Waste Management, a locally owned company already providing service to some residents within the City of Laurens, was the only provider to submit a bid.

“When you have an open bidding process and only receive one bid, it certainly makes the decision clear,” said Mayor Senn. “With that said, I am glad that city residents will soon be able to receive service from a locally-owned business and deal with business owners who care about their company’s reputation in the community and the quality of service they provide.”

Carolina Waste Management is owned and operated by Neal Patterson, who serves on the Laurens District 55 School Board.

Monthly rates may see some change from the current $11 fee, an amount that was calculated more than a decade ago and has never been increased. However, city leaders are working to minimize any increase in fees and are sensitive to those who live on fixed incomes or suffer from financial hardship. Further details will be provided as they become available.

“I believe improved reliability and customer service will be a major benefit for customers,” said City Administrator Delgado. “Soon, customers will be able to walk right up to the counter of the company providing service to them, pay their bills (or pay online), and speak to someone who lives here and wants to do a good job for their neighbors. In the end, that’s what residents of the City of Laurens should be able to expect.”